The body of 33-year-old Terrance Mack was found in a Port Alberni apartment May 4, 2021. Police believe the incident was a homicide. (Submitted photo)

The Port Alberni RCMP are reaching out to the public for information that could solve the murder of 33-year-old Terrance Mack.

According to their media release, dated Aug. 19, RCMP officers and Serious Crimes Investigators arrived at an apartment on the 3200 block of Third Avenue following reports of a deceased man in one of the units. The decomposing remains were discovered May 4, 2021.

It was determined that Mack had been murdered approximately two weeks earlier. A positive identification was made on May 8 and the family was notified of his death on May 9, 2021.

Relatives of Mack gathered outside the apartment building shortly after the news broke, demanding justice for Terrance, who was the father of two young children.

At the gathering a family member stated that they had made a connection between the apartment unit and a police shooting incident that took place at Hitatcu, near Ucluelet, B.C., on May 8, 2021.

RCMP responded to a domestic violence call at a home in the Yuułuʔiłʔatḥ First Nation community. They found an injured male and a woman brandishing what was later determined to be a replica gun. An officer shot and wounded 30-year-old Melinda Martin of Tla-o-qui-aht during the altercation.

Both Martin and her boyfriend were transported to hospital to receive treatment for their injuries.

The Mack family said Martin rented the apartment that Mack was found in. They believe that Martin and her boyfriend were hiding out at Hitatcu, where her boyfriend’s family lived.

The boyfriend has since died, from causes not related to the assault.

Martin was arrested Aug. 9, 2022, following an attack on a liquor store clerk in Port Alberni. According to reports, the female clerk at the King Edward Liquor Store on lower Third Avenue tried to stop Martin from shoplifting. Martin attacked the clerk with a knife, cutting the clerk’s neck.

Martin appeared in Port Alberni Provincial Court on Aug. 17. A trial has been scheduled on fifteen counts including breach, theft, assault by choking, aggravated assault, robbery and possession of a weapon for dangerous purposes.

Neither the police nor the Mack family have named suspects in the death of Terrance Mack, however, Sandra Mack said she hopes investigators are able to piece things together soon.

“It’s an ongoing investigation…we are waiting for the evidence to go through the courts to be filed,” said Mack, adding that the family has been told by investigators the name of a suspect.

The RCMP say they have followed up on each lead during the past fifteen months.

“Officers believe that more people within the West Coast communities have information about Terrance’s murder,” they stated.

“Investigators are still looking to anyone who may have key information to further this investigation and bring closure to those who have been impacted;” stated Constable Richard Johns.

Anyone with information about the events surrounding Terrance’s murder are asked to contact the Port Alberni Serious Crimes Unit at 250-723-2424. 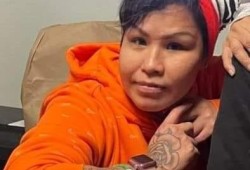