The Ahousaht Wastewater Treatment Plant uses multiple stages of separation and filtration before the water is released into the ocean. (Supplied photos)

The largest Nuu-chah-nulth community on Vancouver Island’s west coast is celebrating the completion of its new Ahousaht Wastewater Treatment Plant (AWTP), making the community’s most prominent beach safe for children to use.

Former elected chief Greg Louie told Ha-Shilth-Sa the state-of-the art facility replaces Ahousaht’s antiquated septic tank, which was installed about 40 years ago. Since then, the village of a few hundred residents saw astronomical growth with several new subdivisions, putting increased strain on the community’s septic system. There are now more than 1,000 Ahousaht residents with more housing under construction.

“It never had filtration,” said Louie of the old septic system.

He went to say that the effluent, almost raw liquid sewage, drained into the ocean through a pipe just off Ahousaht’s front beach, and out to the ocean, putting seafood at risk of contamination.

“There were safety concerns – our beach was highly contaminated,” said Louie, adding that they received a notification from a public health officer forcing them to close the beach until three consecutive “good readings” were recorded from water samples taken at the site.

Ahousaht applied to Indigenous Services Canada for help funding a new system and was awarded $29 million. After researching various options, the nation settled on something that would filter and treat sewage from the village to the point that nearly clear water is dumped back into the ocean.

Louie says that sewage is pumped through the AWTP where it goes through various stages of separation and filtration. There are three sets of turbines that tumble and separate solid materials from the liquid. But Ahousaht is only using two of the turbines. The third will be used as the community continues to expand.

In its final stage of filtration, solid waste is collected and stored until it can be barged out of the village while clear, treated water is drained into the ocean.

“It is safe for the ocean at that stage,” said Louie.

The large facility is located on the north end of the village and employs two Ahousaht people full time. Louie said it came in under budget, with a savings of $25,000 even with the disruption caused by the global pandemic. Starting in 2019, the project took three years to complete.

The computerized system is equipped with alarms and will warn the two employees, Marceline Jack and Tommy Paul Jr., when there is a problem. The system will be under the management of Ahousaht’s Operations and Maintenance team.

The facility is designed to last to the year 2036 when Ahousaht’s village population is estimated to be 1,300.

At a ribbon cutting celebration held Aug. 24 Ahousaht leadership thanked Indigenous Services Canada for the project funding, the Nuu-chah-nulth Tribal Council for project management support, WSP Canada for contributions to the design of the facility and Tritech for the construction.

In addition, they thanked Ahousaht people whot worked on the construction of the project, as well as both past and present elected chiefs, Greg Louie and n̓aasʔałuk (John Rampanen), their councils for their leadership and support.

“The new plant will provide adequate wastewater collection, secondary (biological) treatment with disinfection and marine disposal while meeting both the federal Wastewater Systems Effluent Regulations and the BC Municipal Wastewater Regulation,” said ISC in a media statement. “This larger infrastructure will have the capacity to support future population growth in the community and support seafood safety by protecting local marine ecosystems.”

“Ahousaht Nation acknowledges the collaborative effort that has been undertaken to accomplish the completion of the new wastewater treatment plant,” said Ahousaht Chief Coiuncillor n̓aasʔałuk (John Rampanen). “As an oceanic people, our marine ecosystem and aquatic food systems are integral and interconnected to our way of life. The improvements offered through this updated wastewater treatment facility will not only sustain our efforts to enhance and protect our environment, it will also greatly improve our quality of life. Thank you to former council, the Government of Canada and all of the workers that have made this possible.” 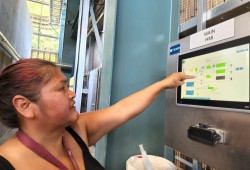 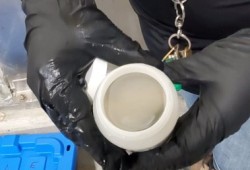