From left to right: Tseshaht members Josh Fred, Thomas Dick, Ivan Thomas and Vance Sieber played in the men’s fastpitch provincial tournament Aug 26-28 at Softball City in Surrey. The Parksville Redsox placed fifth out of 18 teams from across B.C. at the elite fastball competition. (Submitted photo)

Eighteen men’s fastpitch teams from around the province participated in the tournament at the renowned Softball City, where the national championships will be held next summer.

Port Alberni players Thomas Dick, Josh Fred and Vance Sieber from the Parksville Redsox and Ivan Thomas from the Connaught Rangers all represented the Tseshaht First Nation at the tournament.

The Redsox placed fifth out of 18 teams, and Dick said his team played strong throughout the tournament, only losing by three runs to the champions, the Steveston Canadians, in their final game.

The Canadians took first place at the tournament, the Surrey Rebels took second and the Richmond Athletics third.

“It was exciting for me. It’s a pretty big deal,” Dick said. “It was the best fastball teams of B.C…. it was top-calibre ball.”

Dick, who plays second base, said his teammates and him had to travel to Nanaimo weekly for the regular season games and practices since Port Alberni doesn’t have a fastpitch league.

“We had an alright season, win, loss, win, loss but it was a fairly good season,” Dick said.

Dick said the Redsox had a busy weekend at the tournament, playing five games in front of a hundred or so spectators.

Dick, who has played with the Redsox for the past four years, grew up playing baseball and loves the sport.

“My dad played it, I loved the sport, I watched him growing up,” Dick said. “I was a bat boy starting and I remember [my dad] saying just watch the game and study, so that’s pretty much what I did growing up.”

Dick hopes that when others see him and the other Tseshaht members out playing fastball, it could help pick up momentum for a league to begin in Port Alberni. 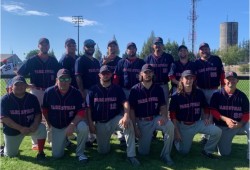