Jolene Joe, a single mother of four, has battled addictions from a very young age. Aug. 31 marked one year since she has been free from alcohol and hard drugs. (Submitted photos)

Coincidentally, it is also a significant day for Ditidaht’s Jolene Joe, 41, who recently celebrated her first year of sobriety.

Joe, a single mother of four, has battled addictions from a very young age. It started with smoking cigarettes at age 12, then at the age of 14 she began using crack cocaine. It all started in Vancouver, where she split time between her parents, who were separated since she was nine years old.

Joe said she was a born fighter. She was due to be born around Christmas 1980 but arrived three months early weighing in at 3 pounds, 2 ounces. She had lung problems and a hole in her heart. But she survived.

Joe’s father was from Enderby, B.C., and her mother was from Ditidaht. Both struggled with alcoholism while Jolene and her siblings went in and out of foster care.

There was one terrible day etched in Jolene’s memory. It was a time she was with an older relative on what should have been a fun family swimming trip.

“My father told them not to bring us swimming,” she shared as she broke down in tears. “That was when my little brother drowned.” The little brother was only six years old.

Jolene said she went into foster care when she was a baby and kept going in and out of care until she was 12.

“I know what it’s like to be in foster care and I didn’t want that for my kids,” she said.

In fact, Joe’s deceased sister left behind six children, and some of her other nieces and nephews are in foster care.

“I wish I could just take them all,” she cried.

Jolene said she began using crack when she was living in Vancouver at the age of 14. She used with her best friend and vowed she would never touch a needle.

“And I never did,” said Joe, but her best friend did, and she died.

At age 20, Joe began abusing alcohol and admitted she was drinking every weekend in Nitinaht for more than a decade.

“I had a 20-year alcohol addiction,” she shared.

The year 2020 was an extremely hard one for Joe. That year she lost her older sister, who died of an overdose along with her boyfriend on the mainland. Joe’s father died that year, as well.

“It was the hardest time of my life,” said Joe.

She went to say that her brother has overdosed eight times and a younger sister is a chronic alcoholic.

Through her 26 years in addiction, Joe managed to function well enough to keep the bills paid and her children fed. But she was starting to lose control that final year. She lost her vehicle and there wasn’t enough food to feed the family.

Recognizing that she was in trouble, Joe surrendered her kids to foster care.

“If I didn’t do that, I knew they would take the kids anyway,” she shared.

She began the hard road to sobriety, taking programs offered by Kackamin and Tsow Tun Le Lum. It was at a grief and loss program that Joe began facing abuse she suffered as a teenager. Reflecting on the losses she suffered throughout her life after she quit drugs and alcohol, Joe said she didn’t know how to feel.

“I still felt the pain, but it was raw, I wasn’t numbing it anymore and I wasn’t hiding. I was really feeling it,” she added.

She noted that not much is different at Nitinaht Lake since she was a teenager.

“I’ve changed but nothing has changed here,” she noted.

Joe credits her children for her sobriety.

“My four kids are my angels, and I wouldn’t be where I am today without them,” she added.

She said she doesn’t blame her parents for all that has happened in her life.

“It wasn’t their fault…can you imagine what we’d be like if residential schools never existed?” she asked.

Joe regained custody of her minor children and, with her Early Childhood Education certificate, works at the community daycare centre along with two other part-time jobs.

She wants to help make change in her community so that her children and all the young people at home grow up safe. She hasn’t figured out exactly what she will do, but she imagines activities for age groups in the community that raise awareness about addiction.

“We need a lot of structure for our parents, I want to see my community grow,” said Joe.

Joe admits she still smokes cigarettes and marijuana, saying she hopes to quit those.

“I don’t want to see cigarettes dangling out of the kids mouths,” she added.

Juggling three jobs, Joe imagines being able to afford a new truck in due time.

Joe says even though she’s been through hell, she is proud that her sobriety anniversary, by coincidence, falls on International Addictions Awareness Day.

“It’s people like me that will make the change,” she said. 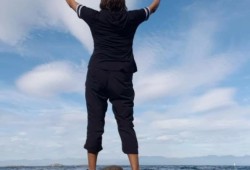 Other Stories in
Addictions, Homelessness