Twenty years after being designated a Canadian Historical Site, the ancient coastal village site is recognized with an informative placard on the trail that leads to its location. (Denise Titian photos)

Huu-ay-aht played host to dignitaries on a beautiful late summer day at their House of Huu-ay-aht to celebrate the unveiling of the official plaque that identifies their ancient village site, Kiix̣in, as a National Historic Site of Canada. The event took place on Sept. 20, 2022.

The day started with a hike down the trail to the beachfront historic site on a clear, warm, late summer day. The 20-minute hike covers rugged, old growth forest. The trail is clearly marked and has boardwalks and staircases for the more challenging areas. There are benches along the way for hikers to rest and enjoy the peaceful sounds of the forest.

But the first thing visitors will see at the trailhead is a newly installed open-air shelter that visitors must walk through to access the trail. There, they may rest and find shelter from the sun or rain.

Trail guide Stella Peters said that there were two, forty-foot-tall welcome figures standing at the entrance of the Kiix̣in longhouse, but they were removed in the early 1900s and put on display at the Royal British Columbia Museum in Victoria, BC.

Huu-ay-aht had 20-foot replicas of the welcome figures made for the entrance of House of Huu-ay-aht and they thought it would be fitting to have the same thing at the trailhead, welcoming visitors. The new welcome figure replicas are nine feet tall.

According to Parks Canada, Kiix̣in is the site of a 19th century village and fortress that exhibits evidence of continuous occupation of the area for almost 3,000 years.

“It is also the only known traditional First Nation’s village of more than 100 villages on the southern British Columbia coast that still features significant, standing traditional architecture,” reads their statement.

Kiix̣in was the traditional capital of the Huu-ay-aht. The village features standing First Nations architectural remains, rare in southern coastal British Columbia. It is estimated that the last longhouse remains at the site were built between 1800 and 1890.

The site is culturally and archaeologically important and has been vigorously protected by Huu-ay-aht. In fact, a sign along the trail advises visitors that they may only enter the area with an official guide. Huu-ay-aht First Nations offers guided tours of Kiix̣in, with traditional knowledge holders, to enrich and teach all who are interested in learning about the history, culture, and traditions of the first peoples of this land. Tours take place between May and September.

Chief Robert Dennis told the crowd that Kiix̣in was designated a Canadian Historical Site in 2002. He said the site was very important to Huu-ay-aht as most could trace their roots back to this place.

“I call it our place of origin, so it is good to celebrate where our roots come from,” said Dennis.

Stella Peters said her grandfather worried about potential damage to the site by visitors and, for years, Huu-ay-aht tried to keep it hidden, to keep it safe. Now, Dennis says, in partnership with Parks Canada, Huu-ay-aht wants to welcome visitors and develop tourism opportunities for their people.

“We want to move toward small business and tourism and away from natural resource extraction,” said Dennis.

“Today, Parks Canada is honoured to join with Huu-ay-aht First Nations in commemorating Kiix̣in Fortress National Historic Site,” said Hallman. “National historic designations are the most significant form of historical recognition that is bestowed by the Government of Canada. Parks Canada has enjoyed a positive relationship with the Huu-ay-aht and this designation would not be possible, nor as meaningful, without this Nation’s commitment to preserving and sharing its knowledge and history.”

Former Deputy Prime Minister Sheila Copps was thanked for making the historic site designation during her tenure. She became emotional as she recalled hearing Stella Peters talk about the importance of the Kiix̣in site.

Copps shared that she attended her first potlatch as a young girl.

“I wondered why the world doesn’t know about these beautiful people,” she said through tears. “It was then that I began to understand the history and importance of this place and I was really overcome.”

Kiix̣in is managed by Huu-ay-aht First Nations. More information about Kiix̣in and the tours can be found at kiixin.ca. 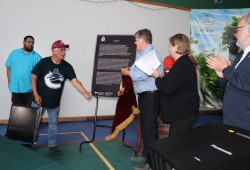 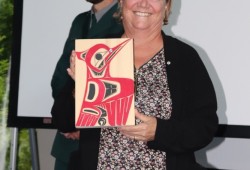 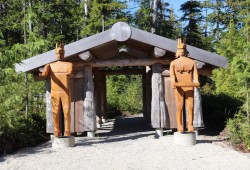