When entering another nation’s territory by canoe, it was critical to ask permission to land before coming to shore.

This is part of the explanation given by Tseshaht member Robert Watts to a large group of high school students, who came to the water for the final section of a multi-disciplinary learning unit on the science of buoyancy, teamwork and cultural identity.

On Oct. 6 the day began with a group paddling from Port Alberni’s Harbour Quay in a traditional canoe recently acquired by Usma Nuu-chah-nulth Family and Child Services. Under a rising autumn sun the chaputs travelled down the Alberni Inlet, propelled by paddlers from the Eight Avenue Learning Centre, with others from Usma and the Alberni Drug and Alcohol Prevention Service helping in the brief journey.

Dozens of other high school students from the learning awaited the vessel’s arrival at Canal Beach, where Tseshaht members demonstrated how a canoe’s approach to a First Nation’s shore was dictated by protocol, which included the role of the beachkeeper greeting the visitors.

“There were many, many different occasions when canoes would travel to each and every community,” explained Tseshaht member Martin Watts, as the canoe awaited permission to come to shore. “A lot of times it would also be for hunting, so they would always ask permission from the Ha’wiih of that nation to participate in hunting or fishing in that territory.”

According to custom, the Tseshaht group sang a paddle song, followed by a prayer to recognise the safe journey and a welcome song for the paddlers.

This was the end of a four-day process for the school, a learning unit that began in the classroom exploring the dynamics of floating.

“The students started off by learning about surface tension, buoyancy and a variety of other topics by exploring what tin foil does floating marbles,” said David Maher, principal of the Eighth Avenue Learning Centre, noting that communication and teamwork became critical as the students constructed boats out of cardboard and duct tape. “After tin foil we went to cardboard and explored a variety of scientific and mathematical principals. The circle of the entire unit was pointed towards communication, collaboration, positive cultural identity, positive individual identity.”

Employing principles of engineering with volume displacement calculations, the groups made cardboard boats, which were brought to Canal Beach for races with a student paddling in each one after the traditional chaputs left to return to its departure location. Most of these cardboard boats didn’t get very far, but one made by Grade 12 students Malcolm August and Aiden Cayer floated about 50 feet along the beach shore.

“I designed the front like a triangle so it could cut through the water,” said Cayer. “I built it how I thought it would work.”

“I got stuck a couple of times, but it was fun,” said August, who paddled in the cardboard vessel. 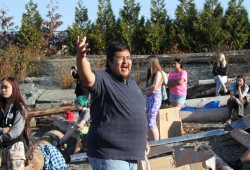 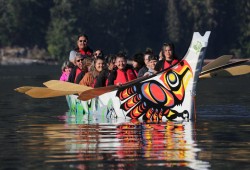 Other Stories in
Health, Education