In the House of Commons last month, Gord Johns, MP for Courtenay-Alberni, said the disability community has been clear: they need help. (Photos submitted by Ryan Chaput)

A bill to re-introduce the Canada Disability Benefit Act has passed second reading and will now go to the standing committee on Human Resources, Skills and Social Development and the Status of Persons with Disabilities.

Bill C-22, that passed second reading unanimously in the House of Commons on Oct. 18, is aimed to reduce poverty and to support the financial security of persons with disabilities by establishing the Canada Disability Benefit and making a consequential amendment to the Income Tax Act.

NDP critic for Disability Inclusion Bonita Zarrillo launched a campaign to re-table the benefit and put possible legislation into motion earlier this year.

The existing legislation is vague and, according to Courtenay-Alberni MP Gord Johns, inadequate in it’s current state.

It is not yet clear who exactly would be eligible for the benefit or what financial supports would be included.

“It’s pretty empty. It fails to really provide any details like who will get the benefit, how much the benefit will be or how much longer will people with disabilities need to suffer in poverty,” Johns said.

“The liberals have been promising this for seven years that they were going to tackle this issue and they’re delayed; it’s really just hurting people with disabilities who are really struggling to make ends meet. Inflation, interest rates, cost of living is having a huge impact so without [the NDP’s] pressure this bill wouldn’t be moving forward.”

According to Statistics Canada, in 2017, one in five (22 per cent) of the Canadian population aged 15 years and over – or about 6.2 million individuals – had one or more disabilities. Among those with disabilities aged 15 to 64 years, lone parents and those living alone were the most likely to be living in poverty among any type of household living arrangements.

According to the British Columbia Aboriginal Network on Disability Society, the Indigenous population of Canada experience a disability rate higher than the general population, at approximately 30 to 35 per cent.

Johns said the bill does recognize persons with disabilities are more likely to live in poverty because of economic and social obligations, which he said is much higher among Indigenous peoples that are living with disabilities.

“We’re being hit with an over 40-year high in food costs and people who are living with disabilities are being most impacted, they’re falling further and further behind,” Johns said. “The disability community has been clear, they need help now, not in three years.”

The Standing Committee on Human Resources, Skills and Social Development and the Status of Persons with Disabilities will meet Oct. 31 to review Bill-22. 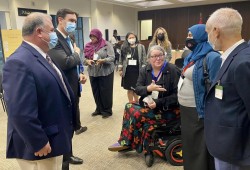 Other Stories in
Infrastructure in Remote Communities, Healthy Living

Ken Watts leads a healthier lifestyle after passing of his father