Carl Martin (left) fills a red cedar canoe with rocks for steaming at the at Naa’Waya’Sum Coastal Indigenous Gardens, near Tofino, on Nov. 26. (Christine Germano photo)

At around 5 a.m., Martin prepared a fire with roughly 150 rocks. These rocks would then go in the canoe with six inches of water covered by a tarp, explained Martin. It took 45-minutes for the red cedar wood to expand.

The event was an opportunity to share knowledge of canoe carving and steaming with the community.

Martin and his brother have been making canoes together for over 40 years. The two of them have made many canoes for nations throughout Nuu-chah-nulth territory, he said.

“My main interest was to teach people at the same time,” said Martin.

Christine Germano, co-creative director with Ivy Cargill-Martin, said they had originally wanted the steaming to be a part of the Carving on the Edge festival in September, but due to the province’s fire ban they had to post-pone.

This year the festival, titled, mułmunčʔałuk, (Taking Care of the Roots) focused on mentorship, wrote Germano in an email to Ha-Shilth-Sa. Since September 2021 Germano has mentored Cargill-Martin as creative director, which was funded by First People Cultural Council. As Cargill-Martin's final project in the mentorship, she led the canoe steaming with Carl Martin, wrote Germano. 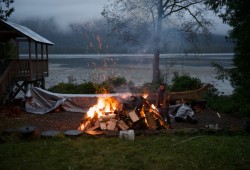