Hippolyte Williams carves the Thunderbird as the bow of the new canoe at Nucii in Port Alberni, the former site of the Redford School. (Alexandra Mehl photo)

At the beginning of January, Hipolite Williams began carving a 35-foot canoe for Uchucklesaht Nation. Through winter, spring, summer, and fall, he and his apprentice, Cooper Styan, worked daily toward carving the red cedar canoe.

The log, chosen by Williams and sourced from C̕awak ʔqin Forestry, was 45 feet long, 5 feet at the base, 3.5 to 4 feet at the top, weighing 16, 000 pounds, said Ryan Anaka, director of Lands and Resources for Uchucklesaht.

“This one had a perfect half moon kind of shape on one side,” said Williams, who is a member of the Huu-ay-aht First Nations. “Each log, even if it looks perfect on the outside, changes when you open it up.”

Williams, who’s been carving since 1995, said that with the logs that are available currently it’s difficult to get what would have been chosen traditionally. But with what is available today, the primary focus is to choose one with less knots.

“All the knots you see are going to come out on one side,” said Williams. “We make sure we flatten the bottom, find the bottom…and then we take all the knots out of there afterwards.”

When picking a tree in the forest Hipolite said that the side with fewer branches would become the base of the canoe because there would be less knots.

Williams' favorite part of the project was using the adzes to dig out the canoe.

At the bow of the canoe is a thunderbird, carved from the strongest and heaviest part of the log. Having the weight of this piece here functions to carry the canoe forward, said Williams. Designed along the canoe is a sea serpent, and a killer whale to tell the Uchucklesaht origin story.

In October, Williams and Styan tested the canoe in the water.

“With just the two of us paddling, it was really fast, really stable …and went straight,” said Williams. “Ticked all the boxes.”

“When they lifted it up, it weighed about 1,000 pounds, so they took about 15,000 pounds of material away,” said Wilfred Cootes, executive of Lands and Natural Resources for the Uchucklesaht Tribal Government.

With the addition of seats, the canoe is expected to weigh roughly 1,500 pounds, according to Cootes.

Cootes said it's rewarding to see the youth tour onsite and meet Williams and Styan while they bring this to life.

“I absolutely love walking into the tent and smelling the cedar and it really brings so much joy,” said Cootes. “And to see that the cultural aspect of our people come back alive again.”

Styan, who is a Uchucklesaht member, is Williams’ first full-time student.

“I figured it's my duty to learn to teach,” said Williams. “That's my favorite part, is teaching. I want to teach more and more.”

Williams said that Styan had been learning about adzing and shaping, and nearing the end of the project got into the knives, learning how to carve designs.

Styan didn’t think that carving would be something he would become involved in until he saw the opportunity in the Uchucklesaht Newsletter, he said.

“I've pretty much never really worked on carving before. Other than just fiddling around with knives when [I was] younger,” said Styan.

Styan said it was important to him to be involved in this historic project. He plans to continue carving after it’s done, and has ordered his own carving tools.

“It's been an ongoing wish for the nation to do this,” said Anaka, who was tasked with sourcing the tree, organizing grants, and contracts for the project.

Anaka said that in speaking with elders it could have been between 50 and 75 years since Uchucklesaht has last seen a community canoe of this caliber to gather around.

“We're hoping to participate in the canoe journeys, as well as trying to reconnect our citizens and our youth, especially our youth, to the lands and especially the waters,” said Cootes. “To give them those skills and bring that part of their culture back to the children has always been a dream.” 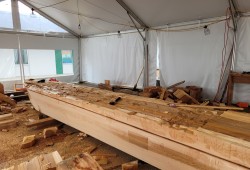 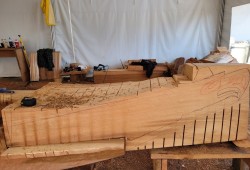 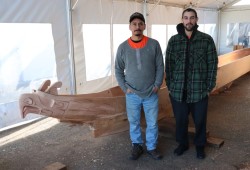