Shalaya Valenzuela, 23, is a busy, young Tseshaht woman, pursuing a university degree while competing on Canada’s Women’s Rugby Sevens team in Cape Town, South Africa on the weekend of Dec 9 to 11.

She is part of an ensemble with members from across the nation representing the Canadian National Rugby Sevens senior women’s team. They first competed in Dubai early this month and wore the red and white in Cape Town, South Africa last weekend.

According to Rugby Canada, rugby sevens is a stripped-down version of the sport with just seven players, instead of 15, on each team playing on a full-sized pitch.

“With fewer bodies and extra space on the pitch, games are fast-paced, full of breakaway sprints and exciting tries,” states Rugby Canada.

There are two seven-minute halves with a one-minute half-time break.

Shalaya plays center for the team in a contact sport that can be brutal. For father Richard Valenzuela, it can be hard to watch a game.

“One time she got knocked out and another time she lost her front teeth…I just cringe,” he said.

He is, however, very proud of his daughter who just finished playing in a tournament in Dubai earlier this month. According to the Canadian Rugby website, Canada’s Women’s Sevens placed 9th in Dubai. They travelled to Cape Town, South Africa for their next tournament.

According to Rugby Canada, the Maple Leaf Academy (MLA) is a program that supports up-and-coming female players who aspire to be selected to Canada’s Women’s Sevens team and compete at the Olympic Games and on the HSBC World Rugby Sevens Series.

They go on to say that the MLA is a full-time commitment for these players who train Monday to Friday for five hours per day.  These athletes receive the added benefit of training alongside the senior women’s sevens team for many of their sessions.

“After years of hard work, I got called up to the senior national team this summer,” Shalaya shared. “This season is important for our team as it’s an Olympic qualifying season.”

According to Abbey News, an Abbotsford publication, the women’s team earned a total of four points in Dubai and sit in ninth place in the 13-team series.

In South Africa, the women’s team tied with France but lost to the US on Dec. 9. They placed 8th in the tournament.

“It’s a surreal feeling playing alongside the women I watched and looked up to as a child. I’ve taken it all in and now its time to become that person for another kid,” continued Shalaya, adding that she is proof that if you pursue and fight for what you are passionate about, your dreams can become a reality.

When she’s not playing rugby, Shalaya studies as a third-year Criminal Justice student.

“I don’t know what I want to do yet but I could use it (her degree) to get into law or something in youth crime prevention,” she shared.

“As her father I am so proud of her for not only the successes, but for her determination despite the struggles along the way,” said Richard. “Rugby brings her joy and all I ever want is for my daughter to be happy.” 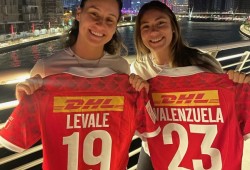 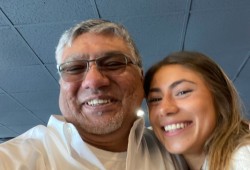