The Alberni District Secondary School senior boys’ basketball team is jumping into Totem 67 revived after two years of cancellations and postponing of the tournament due to the pandemic.

The team is bringing a new spark with them to this season and Totem 67.

“I think the biggest thing is just the return to the full experience,” said coach Craig Brooks, the senior boys’ basketball coach of approximately six years. “We have some players returning this year that didn't get a chance to experience the band and a full packed house, and all the energy that comes with that,”

After Totem 66 was cancelled in 2021 due to the pandemic, it was once again postponed the following year. Due to a public health order last year’s Totem, originally scheduled for Jan. 6. 2022, was postponed to March.

“This will be the authentic thing. And there isn't a player on the team that's had that,” said Brooks reflecting on the upcoming tournament, scheduled for Jan. 5.

Brooklyn Doiron of Tseshaht and Ahousaht is a Grade 11 student at ADSS, as well as a point guard and shooting guard for the senior boys’ basketball team. For Doiron, this will be his first time playing in Totem.

“It's my first Totem so I'm pretty excited for it,” said Doiron. “Totem’s always been a great thing to watch. So, it's pretty exciting now that I'm going to be playing in it.”

Doiron has watched the last two Totems, he said.

Doiron began playing basketball because of his shared love of the National Basketball Association (NBA) with his father. He has been playing the sport for five years.

There are many layers to the meaning of Totem, said Brooks. There’s school pride, the extent that the community is involved, and the depth that the players are involved in their community, he explained.

“The boys are constantly aware of how we're connected to the community,” said Brooks.

Brooks said that in his years of coaching he’s always had hard-working players. With this team, they have been preparing all summer for this upcoming season, he said.

“Part of that is because of the girls success last year, going to provincials, [and] winning Islands, and that sort of sparked a fire.” said Brooks. “We've got some really talented players this year as well.”

“This year, the guys won. They see those lost opportunities [due to COVID-19] because again, it's out of our control. And I think they want to make a name for themselves and for the school,” said Brooks.

The team is already on a roll with a first-place finish at the Gravel Pit Classic and third-place at Isfeld Ice Invitational. 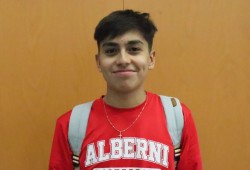 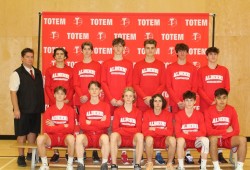