The ADSS senior boys team won the Totem tournament after defeating the Carihi Tyees 59-51 on Jan. 7. The Alberni senior boys squad opened their tournament by beating Ballenas from Parksville 107-61 on
Jan. 5 followed by a 95-74 win against Stelly's the following day.  (Alexandra Mehl photos)

The ADSS senior boys basketball team have taken home the Totem championship after rallying together to beat the defending champs, Carihi.

At the start of the final quarter on Jan. 7 the two teams were tied, and the Alberni District Secondary School team took to the court determined. As the minutes went on the crowd grew with intensity, alternating between cheering and chanting, as the two teams battled for the win.

Prior to the final game Craig Brooks, coach of the Alberni senior boys basketball team, predicted the game would be a “nail biter right to the end, as long as we’re doing the things we want to do.”

With each basket, the crowd grew louder and louder with victory on the horizon. The ADSS senior boys ended up stealing the win 59-51.

“These guys rallied,” said Brooks. “I mean, they love each other, they work for each other…. They've worked hard for this.”

“We've talked a lot about how we've been overlooked right from the get-go,” added Brooks. “They're fired up. They want to prove a point this year… every step of the way, we've learned lessons in victory and losses and we're just building. We haven't hit our peak yet, [and] there’s more to come.”

The first game for the ADSS boys was against Ballenas on Thursday, Jan. 5, which they won 107-61. The following day the boys played Stelly’s and won 95-74.

Ty Cyr, a Grade 11 student at ADSS who was named most valuable player for the Totem Tournament, said one of the challenges the team faced was nerves.

“You got all your classmates, your family, your friends, [and] the band playing,” he said. “It's a big deal so that takes a big part mentally.”

Liam St. Onge, Grade 12 student at ADSS, captain of the senior boys basketball team and one of the tournament All-Stars, agreed with Cyr.

“Definitely adjusting to the atmosphere makes you want to give 110 per cent,” said St. Onge.

St. Onge described the energy in the gymnasium as electric.

“Totem’s been, by far, the funnest crowd, function, [and] tournament… I’ve ever played basketball,” said St. Onge. “It’s crazy how much love is in the gym every night for the team, [and] for the town.”

Brooks said that the crowds lift their spirits.

“They're playing for each other, but they're aware of how much ADSS athletics means to the community,” said Brooks. “Everyone wants nothing but the best for the boys and they just feel it, and it pushes them forward.”

The Senior Boys North Island Playoffs, which will name the qualifiers for Islands, will be hosted at ADSS from Feb. 16 - 18.

“This team, they deserve to be ranked provincially,” said Brooks. “We've gone from believing we can be to knowing we are.” 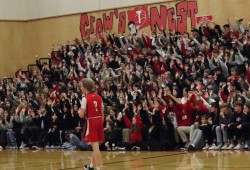 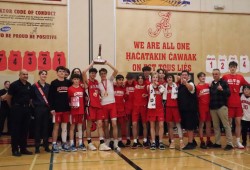