Despite comprising a relatively small portion of the House of Commons, the federal NDP is in a position to “disproportionally” represent the interests of coastal residents and First Nations in Ottawa, says the party’s leader during a recent visit to Port Alberni.

Over the past few federal elections an orange wave has swept across Nuu-chah-nulth territory – and, for the most part, Vancouver Island as well – enabling the NDP to represent the region in the face of larger Liberal and Conservative contingents. During the last vote in September 2021 all three NDP incumbents in Nuu-chah-nulth territory kept their seats, making Rachel Blaney, Gord Johns and Alistair MacGregor part of the 25 NDP candidates who won representation among the 338 in the House.

Prime Minister Justin Trudeau and the Liberals didn’t gain the majority they hoped for, instead retaining a minority government with 158 seats. With the ongoing risk of losing power through a vote of no confidence, the Liberals announced an agreement with the NDP in March of last year. The Supply and Confidence Agreement prioritises reconciliation with Indigenous Peoples, improving health care and affordability among its key elements.

“Though only 25 MPs in size, we are disproportionally influential for people,” said NDP Leader Jagmeet Singh in Port Alberni on Jan. 24, one of several Vancouver Island stops this month. “Though we only have 25 MPs, we actually play a really strong role in government right now because of the agreement that we have, which allows us to put a lot of pressure on the Liberals to deliver.”

For many Nuu-chah-nulth-aht, the delivery of reliable primary care continues to be a top concern. Across British Columbia one fifth of residents are without a family doctor, but this systemic shortcoming is disproportionately affecting First Nations people, according to In Plain Sight, a 2020 report on discrimination in the health care system. The study notes that Indigenous seniors are not connected to a family physician at a rate 89 per cent higher than others who are over 65 in the province.

In Port Alberni, which has an Indigenous population of nearly 20 per cent, there is one family doctor for every 700 residents, according to census data and numbers from the College of Physician and Surgeons of B.C. As a result, walk in clinics regularly see long line ups, while others seeking medical attention are often forced to visit an emergency department that sees almost 20,000 visits a year from patients across the region.

In November 2021 the Ha-Shilth-Sa publicized the challenges of Tseshaht elder Cheryl Amos, who visited the West Coast General 25 times in one year as she struggled to get answers for a persistent pain in her lower abdomen. Amos was eventually referred to a kidney specialist, but many others continue to rely on the ER when a primary care physician isn’t available in the clinic.

“This is a national crisis,” said Singh. “On the island it’s even more acute in some ways, the fact that people can’t get a family doctor.”

The NDP leader commented that he sits between a Liberal leader who isn’t taking the issue seriously enough, and the Conservatives’ encouragement of more for-profit health care, and option that is currently opening up in Ontario.

Recently the Province of B.C. introduced a new payment model for family doctors, designed to compensate them more fairly for the time they spend with patients and dealing with complex medical issues. The Longitudinal Family Physician Payment Model is due to come into effect Feb. 1, paying general practitioners about $130 an hour for their work, translating into approximately $385,000 annually, up from $250,000 under the existing payment system. This is intended to assist doctors shoulder office costs, while employing staff and acquiring equipment. Under the new model family doctors can also bill the province for each patient interaction, ranging from $25-110, depending on its complexity.

“The new payment program is very promising, it will be something that I think supports family doctors,” said Singh, although he believes that more funding from Ottawa is needed to help B.C.’s doctors. “They can only do so much without federal support. That’s why I’m fighting to get Prime Minister Trudeau to realise that this is serious and it requires additional supports as well.”

After a 10 per cent rise in grocery costs over the previous year, last fall the NDP called for a Parliamentary probe into escalating food prices. This year grocery bills are projected to continue to rise by seven per cent, according to the Canadian Food Price report compiled by researchers from a group of universities across the country.

“The major grocery store chains are using inflation as a cover to rip people off, because their profits are hitting record levels,” said Singh.

He points to taxes imposed on oil and gas companies in the United Kingdom, where Shell and BP reported considerable profits amid increased demand after the lifting of COVID restrictions and limitations on global supply due to the Russian invasion of Ukraine.

“We need to disincentivize this ripping off of Canadians, this gouging of Canadians, and to do that we need to put in an excess profit tax on these corporate grocery stores that continue to raise their prices,” stressed Singh. “If we make them pay their fair share as they increase prices, we can disincentivize them from increasing them that way.”

After his visit to Port Alberni Singh was scheduled to head to Nanaimo on Jan. 25 to discuss health care, meet with municipal leaders, and tour a pulp mill. 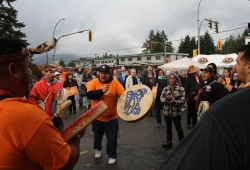 Other Stories in
Health, COVID-19