Julia Lucas grew up in Ahousaht speaking Nuu-chah-nulth at home. Now she’s transferring the language to children in Port Alberni at the Friendship Centre’s brand new daycare facility, where young ones are immersed in Nuu-chah-nulth culture to ensure traditions continue.

Lucas is one of two elders at the childcare centre who speak fluent Nuu-chah-nulth. This approach includes giving the children traditional names.

“When you call them, they’re starting to remember the names,” said Lucas, whose traditional name is Taupaut. “We’re doing storytelling, singing songs in our language with the commands. ‘Put away your toys and you can go out and play,’ we say in our language.”

The Treasure Our Little Ones Child Care Centre, or ?iihmisuk taatna?is, held its official opening on Friday, May 26 after operating for four months. Over this time enrollment has gradually grown to 20 children. The brightly lit facility offers space for up to 50, with rooms designated for infants, 2-5 year-olds and school aged children.

“It’s actually been one of our visions for over 20 years, probably 25 years,” said Friendship Centre Executive Director Cyndi Stevens of building the daycare.

Staff draw on traditional wisdom while running the childcare centre, including mornings when children are immersed in Nuu-chah-nulth language.

“We’re really trying not to use English in the classroom,” said the daycare’s manager Kristen Hunt. “The rest of the day the teachers are still implementing all of our survival words and helping words. We probably have about 75 words and phrases that we’re using throughout the day.”

The facility’s back yard includes a miniature longhouse, all part of what Hunt sees as a uniquely purpose-built facility.

“A lot of childcare centres are built in churches, in schools and whatever they can find, so to have something made for this makes a big difference,” she said.

This came at a cost of nearly $1 million, $491,000 of which was provided by the B.C. Ministry of Children and Family Development. The Friendship Centre held fundraising activities to help shoulder the rest of the investment.

“We’ve mortgaged the building and we’re going to continue to fundraise,” said Stevens. “We sold one of our buildings to help contribute towards it.”

Support came from the City of Port Alberni with the donation of property and waiving municipal utility hookup fees. West Beaufort Construction also donated some materials.

Running a culturally focused daycare is a dream the Friendship Centre wants to continue, as the organization is seeking more funding to continue the immersion program.

“Originally it was every day. We have lost a little bit of our funding, so now it’s two days a week,” said Hunt.

“To fund that in all of the classrooms you’re probably looking at $75,000 per classroom, so it’s not a cheap venture, but I think it’s really important,” noted Stevens of the annual cost of the immersion program. “We’ve been trying to seek donations from different foundations.”

During the childcare centre’s opening ceremony Tseshaht Chief Councilor Cynthia Dick reflected on the importance of incorporating Nuu-chah-nulth traditions into a school environment. She attended the Haahuupayak Elementary School.

“I know that I wouldn’t be here today if it wasn’t for Haahuupayak school,” she said. “I just know how important it is for us to take back our language, to take back our culture because it’s who we are.”

Hunt has been an early childhood educator for 27 years, and came from mainland B.C. to work in Port Alberni three and a half years ago. She was surprised by the effect that the immersion had on children at Treasure Our Little Ones.

“I have never worked in a place that’s magic, and this place is magic. I think it has a lot to do with the cultural teachings,” she said. “The children are in the classrooms with their elders, and there’s a different feel. When the children are immersed in the language and the culture, they are so at peace, and that is something I didn’t count on.” 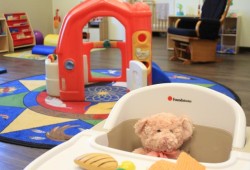 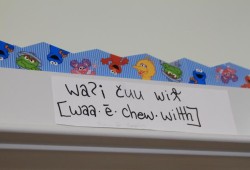