Archeologists from the Unviersity of Victoria excavate a home site on Keith Island. (Iain McKechnie photos)

Tseshaht First Nation has signed a five-year collaborative agreement that will see the excavation of middens at some of their ancient village sites in the Broken Group Islands. A midden is essentially a kitchen trash heap that normally contains bones, shells and sometimes ancient tools or fishing/hunting gear.

The project will run every summer from 2017 to 2021, bringing University of Victoria students to the remote islands for three weeks of hands-on archaeological work. This year a site at Keith Island was excavated.

Keith Island is one of the islands in the Broken Group and was among the last that the Tseshaht inhabited up until the 20th Century. Elder Kathy Robinson was born there in 1931, according to archeologist Denis St. Claire. The island was eventually abandoned in the 1950s as people moved to urban centres for school and work.

St. Claire says it’s the first year of work on Keith Island and because of its size and complexity he expects to be out there for at least two to three years. St. Claire has worked for Tseshaht in archaeology and ethnography since 1973. He is proud of the fact that the late Tseshaht Tyee Ha’wilth Adam Shewish adopted St. Claire into his family in the 1980s.

In February 2017 Tseshaht council voted to support a five-year collaborative agreement between the First Nation, the University of Victoria, the Pacific Rim National Park Reserve and the Bamfield Marine Sciences Centre.

The work being carried out is mutually beneficial. The university students get rare access to a valuable historic site. The archaeologists get to use Tseshaht infrastructure at the islands, including the dock and cabins, and - even more importantly - access to volunteers and historical input from the elders.

The Tseshaht get ownership of the artefacts found and documented information to back up their rights and titles claims.

The project will build on the successes and legacy of previous cooperative efforts.

Students working on this project will earn university credit. “It is a unique opportunity for them as they work toward their career aspirations,” said co-director Dr. Iain McKechnie.

Over the six-week program, students will spend three weeks in the Broken Group excavating sites. These sites are selected by Tseshaht in order of importance to them. The remaining three weeks are spent at the Bamfield Marine Sciences Centre where they process the materials uncovered at the island.

“They get to learn about the stuff they find – it’s a beginning-to-end learning process for them and a very rare opportunity for students to be able to get out to the territory,” said McKechnie.

Other Tseshaht members are involved in the process. The Tseshaht Beachkeepers are there all the time guiding tourists and monitoring the territory. Others are contracted to prepare meals for the researchers, or to transport people and gear.

“We give tours to kayakers in order to give them a sense of the human dynamic and the rich historical First Nations component in the islands,” said St. Claire.

He noted that since Keith Island was one of the last inhabited by the Tseshaht, its first, uppermost layers of the dig showed a mix of modern and old artefacts. The students found the remains of a woodstove in one dig site. As time went on the inhabitants began using materials introduced by the Europeans like metal. They made use of the best technology available, said St. Claire.

As the dig goes deeper students find more traditional artefacts like fish hooks made of bone. In addition, they find other bones, the remains of what the people ate. More than 18,000 animal bones were found this year.  Next year the dig should turn up materials from pre-contact.

In a previous dig in Tseshaht territory more than 40,000 animal bones were uncovered in one pit.  The small pit provided a hint as to what the inhabitants lived on. There were 75 species of sea birds, fish, sea mammals, land mammals and shellfish. “The Nuu-chah-nulth knew how to exploit the area in order to support their large populations,” said St. Claire. They learned where they had to go for food and there were changes in their diets when something was unavailable. Also, there were changes in their diets noted when technology changed.

“The government always wants proof of constant occupation from First Nations in order for them to support their territorial claims,” St. Claire noted.  This information will be useful in supporting aboriginal rights and title claims.

There are 73 major midden sites and many more small ones in Tseshaht traditional territories. There are 170 archaeological sites in the Broken Group Islands covering an area of approximately 80 square kilometres.

McKechnie has been working with Tseshaht elders who he says have made great contributions to the project, including their knowledge of place names, political and social history.

Any excavated material is the property of Tseshaht First Nation and will go back to them after they’ve been studied.

The dig at Keith Island ran from July 7 – 22. During that time Tseshaht organized a back-to-home member visit on July 19. Many Tseshaht members have never been to the Broken Group Islands. It was a rare opportunity to visit their ancestral home exploring the island and observing the archaeological team at work.

Besides the work that university students do at the island, the proponents hope to raise awareness of the need to protect historic sites. Human remains are known to have been tampered with in some burial sites and some have been unlawfully removed. There is a stone fish trap that has survived hundreds of years at one of the islands, but droves of unaware tourists climb onto them at low tide, perhaps not aware of their historical significance. The result is the piles of stones are being flattened down. They need protection.

“We have many committed volunteers coming out to help us every year, giving their time, effort and knowledge. It’s a privilege to work in a place like this,” said McKechnie.

The archaeological work will spend at least two seasons at Keith Island before moving onto other islands in the Broken Group.

Their work should result in the collection of materials that support Tseshaht oral history as well as raising public awareness of the significant Tseshaht history in the Broken Group Islands. 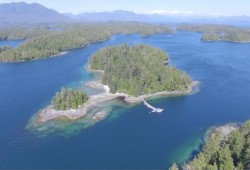 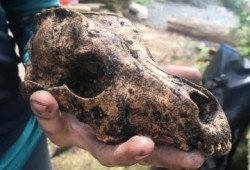 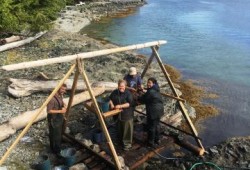 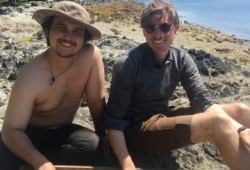