A small crew gathered in the traditional home of the Mowachaht Muchalaht First Nation in September to begin renovations on a church erected 61 years ago in honour of a Catholic pope.

Work on the historic site is expected to last three to four weeks at the hands of a half dozen or so workers from the First Nation and Kinsol Timber Framing, a construction firm specializing in heritage rebuilds. Erected by the Mowachaht Muchalaht community in 1956, the church was originally dedicated to Pope St. Pius X, replacing another church in Yuquot that burned down two years prior.

The structure was decommissioned as a Catholic church in the in 1990’s, but its use continued as a cultural gathering spot, a place for worship and a point of interest for visitors to Yuquot, which is located on the southwestern edge of Nootka Island, off Vancouver Island’s west coast. In the mid-1990s replicas of carvings belonging to the Maquinna and Jack families were installed in the church’s main hall.

“A lot of nations choose to tear down their churches,” said Margarita James, President of the Land of Maquinna Cultural Society. “But because some of the elders go married there - there were a lot of nice community events there - elders at that time chose to keep it.”

This September and October the crew will be undertaking repairs to the structure’s windows, tower roof, steeple and its flashing as well as church floor, which contains tiles made from asbestos.

“We’re going to change the windows and doors to its original configuration,” said Robin Inglis, the cultural society’s executive director. “We’re preparing the floor to have tiling done in March.”

A renovation to the old priest’s quarters is also in the plans to make this section better suited to Nootka Island’s wet and windy climate.

“The building through that area doesn’t breathe properly,” said Inglis. “The insulation that was put in the ‘90s has proved to be a problem.”

The work is being funded by a combination of grants from the First Nation, the provincial government and Parks Canada. The Land of Maquinna Cultural Society currently has $120,000 available for the project, comprised of a $50,000 provincial Canada 150 grant, $10,000 from the Frist Nation and $60,000 in matching funds provided by Parks Canada. The federal department has approved up to $79,000 in support if more matching funds can be raised by the cultural society. As it sits on the ancestral home of the Mowachaht for at least 4,300 years, the church is owned by the First Nation.

In an email to the Ha-Shilth-Sa, Parks Canada explained that the matching funds are designed to support local economies and encourage Canadians to explore the country’s heritage. Besides being the ancestral home of the Mowachaht, Yuquot was British Columbia’s first point of contact between Europeans and First Nations peoples when the site became a trading destination for the British and Spanish in the late 1700s. During the Nootka Sound Controversy of 1789-94, conflicting trading interests brought these two European superpowers to the brink of war. Since 1923 Yuquot, or Friendly Cove, has been designated as a National Historic Site.

“By investing in the conservation of non-federally owned heritage places through the cost-sharing program, we are fostering lasting relationships with the community groups that operate them,” stated Parks Canada.

The church still contains components given to the Mowachaht Muchalaht community by the Spanish government in the 1950s. These include elaborate stained glass windows at the front of the building, depicting European interactions with Yuquot residents in the 18th century. One caption reads: “Father Magin Catala preaching to the Indians.”

“If you look at the content, the aboriginal people are always in the background,” commented James. “The community rather accepted the windows, because they were given to the community when the church was built.”

Restoring the church to its original state is important, as it marks Yuquot’s history of being Spain’s most northerly garrison in the Americas over 200 years ago.

“When people acknowledged the church, they didn’t really want that part of the community history to be rubbed out,” James added. “The government of the Spain always acknowledges those ties that we have with them.”

“The church is one of the few remaining contemporary buildings found within the designated place,” stated Parks Canada. “It is now used as a cultural centre and museum by the Mowachaht Muchalaht First Nations and the proposed work will allow its continued use for years to come.” 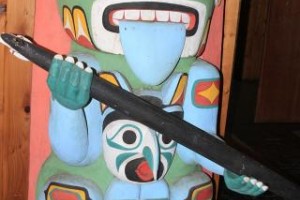 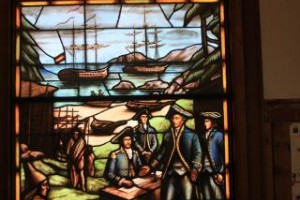