Lieutenant Governor Judith Guichon looks over a book in the new library collection donated to the Maaqtusiis Secondary School in Ahousaht. On Nov. 6 Guichon visited the community with Write to Read volunteers to officially open the library, cutting the ceremonial cedar rope with student librarian Christina Thomas, (Eric Plummer photos)

Seventeen-year-old Christina Thomas walks down the book shelves of her high school library, glancing over the titles as sunlight pours in over the brand-new spines. She stops to pull out certain titles, describing how her curiosity has been sparked.

“Whenever I read one of the books it seems like, you’re the person in there,” commented the Grade 12 pupil at Ahousaht’s Maaqtusiis Secondary School, who also serves as the student librarian. “Most of the time you feel like you’re the author reading it too.”

In recent months the potential for Thomas’s literary exploration has blossomed with the donation of a new library to the Ahousaht’s high school, thanks to the efforts of B.C.’s Lieutenant Governor Judith Guichon and Write to Read, a charitable foundation that backs initiatives to better empower remote communities. In June 4,000 titles arrived with shelves and a few computers. Additional donations followed, growing the collection to over 10,000.

“In the beginning there was only a couple hundred. There were only two book shelves here,” recalled Thomas.

To mark the library’s official opening, the Grade 12 student and Guichon cut a cedar rope tied to the facility’s doors when the Lieutenant Governor visited Ahousaht on Nov. 6 with volunteers from Write to Read.

“It’s a wonderful way for me to finish my five years as lieutenant governor,” she said of the library development. “When you open a book you can travel around the world. It gives you access to ideas, access to history.”

During the visit Guichon recalled that it’s been almost three years since she first saw the Maaqtusiis Secondary building, which was completed 2011. At the time Guichon was impressed by the new school, but wondered why the library only had a scant collection of books. She reached out to Bob Blacker of Write to Read to begin the process. The charitable foundation has now completed 15 libraries across B.C., largely funded from Rotary clubs and business donors like the Windsor Plywood Foundation, which cut thousands of dollars from the Maaqtusiis library budget by providing building materials.

Write to Read is now planning to build an adult learning centre with Ahousaht. Early building designs are based on initial consultation the charity held with Ahousaht.

“That came out of a four-hour meeting where everybody told our architect, ‘This is what we want to see’,” said Blacker, noting that the learning centre is intended to help empower the Ahousaht community. “We’re teaching members of the community trades: carpentry, plumbing, electrical - because we believe that if we’re going into a community, we should be looking at capacity building as well.”

While at the high school Guichon and the Write to Read team were welcomed to Ahousaht by cultural performances from Maaqtusiis students. The visitors were thanked on behalf of the community by Elected Chief Greg Louie, who hopes that the library will help inspire students to teach or pursue other professions.

“Education is really important; that’s why we have this building,” he said. “There’s nothing wrong with dreaming big.”

“The world opens up to you, just in reading,” added teacher Patti Burridge, who helped to start the library with Ahousaht’s school librarian, June Titian. “You’ve opened an entire world for kids on a little island in the Pacific Ocean.” 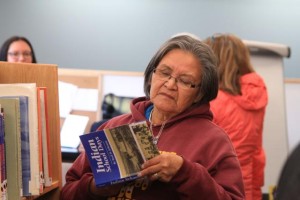 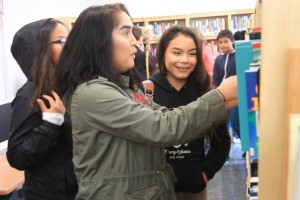 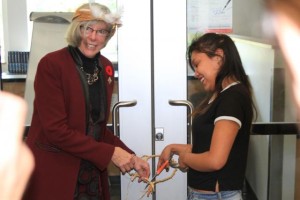