A dead humpback whale was discovered on Mussel Beach near Ucluelet on Oct. 11. (Carla Moss photos)

It has been confirmed that the 11.8-metre dead whale reported floating off Tofino in the first week of October was the same whale found on Mussel Beach on Oct. 11, according to Paul Cottrell, Fisheries and Oceans Canada’s Pacific Region Marine Mammals Coordinator.

Owner of Mussel Beach Campground, Lori Fendelet, said, “It happened on Thanksgiving weekend, when Curtis (Lori’s husband) was just doing his routine checks of the lots down there he spotted the whale.”

“The thing that was really obvious was that the jaw bone was protruding out,” added Fendelet. “It was really out of where it was supposed to be and that’s why they were thinking  that something might have hit it.”

“We’re not sure of cause, but it definitely would require a significant force to cause that,” said Cottrell of the deformed jaw. “We’ve taken pictures all round that lower jaw on the right side that was separated. It was very unusual.”

“It was fantastic owners of campground called right away,” said Cottrell. “It’s so important for people to call our 1 800 number for samples or to help injured animals. The number is 1-800-465-4336 and it’s open 24/7. If we hear about it early enough we can sample early. After a couple weeks it’s gets difficult to secure enough information from tissues to determine cause of death.”

The final report will be done in about a year. Largely due to workload, “testing on some samples can take a quite a while” Cottrell said.

The number of incidents between boats and whales around Vancouver Island has been increasing.

“There has been a number of strikes this year,” said Cottrell. “Mostly smaller vessels in transit at high speed, at least for those that have been reported. In regards to J-34, the necropsy in Seashelt, that animal also had evidence of blunt force trauma in the head region. There was also a strike in Haida Gwaii with a vessel that was in transit and one occupant was quite injured and the one in Victoria this fall.”

“The humpback whale population around Vancouver Island has been increasing over the last 20 years and so it’s not surprising that interactions with fishing gear and vessels are also increasing,” said world renowned whale biologist, Dr Jim Darling. “It’s similar to what we’re witnessing on the east coast of Canada with the right whales. We lost 16 critically endangered right whales this year, all due to entanglements and ship strikes, so it’s not a small issue. Thankfully, we’re not at the stage here that they are on east coast, yet.”

“We’re always asking boaters if they know they are in areas where there’s whales to be extra vigilant and go slow,” said Cottrell. “One of the slogans we’ve been using is ‘if you see a blow go slow’. If you’re going 40 knots you can’t slow down fast enough.” 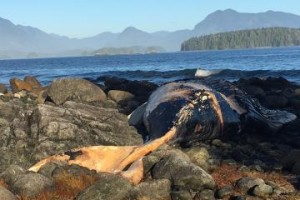 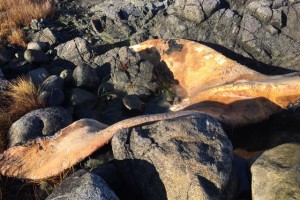 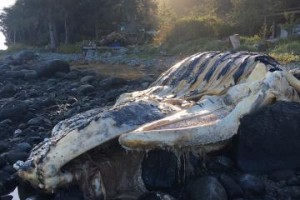