Everett Jones, Ian Henry and Desmond Peter remain missing since they were last seen in Duncan. A meeting involving RCMP and the Cowichan Tribes was held on Nov. 21, where those in attendance included Jones' mother Myra Charlie and brother Edwin Jones (following picture) as well as Desmond Peter's mother Elizabeth Louie, who is pictured with his grandmother. (Denise Titian photos)

This fall the National Inquiry into Missing and Murdered Indigenous Women and Girls continued with hearings at specific locations across the country. Hundreds of testimonies have been heard as the inquiry seeks to address the “widespread systemic violence” affecting indigenous women and girls, according the initiative’s chief commissioner Marion Buller.

But a recent meeting in Duncan indicates the issue could apply to aboriginal men as well. Families and members of the Cowichan Tribes are struggling to understand why three individuals from the band remain missing since they were last seen in one area of the Vancouver Island town.

Cowichan Tribes leadership hosted the meeting on Nov. 21 to provide information on the cases. A member of the local RCMP detachment was there to deliver information from the investigative perspective.

The nightmare for the Louie/Peter family started on Mar. 1, 2007 when their 14 year-old son Desmond failed to return home. The last confirmed sighting of Desmond was on Cowichan Way, near the old Malaspina College - across the street, south of the Real Canadian Superstore - in Duncan, B.C.

More than eight years later in early August 2015, Ian Henry, 26, left his Tzouhalem Road home on his bicycle. A family member reported seeing him on Aug. 10, 2015 near the Stone Butter Church on Tzouhalem Road. On Aug. 27 a hoodie was found in the bushes nearly three kilometres away, just off of Tzouhalem. RCMP believe the hoodie could have belonged to Ian Henry and took it into evidence.

Then, on Feb. 10, 2016, Everett Jones, 47, disappeared near his home in the Club Road area of Duncan. Club Road is less than a kilometer west of the Real Canadian Superstore. Jones, whose father is Pacheedaht, is described as being of diminished mental capacity and was known to go for walks to nearby commercial areas in downtown Duncan. According to a family member, Jones was spotted on surveillance video at a business near his home around the time he disappeared.

All three men are aboriginal and connected to Cowichan Tribes. Another thing they have in common is that they all have special needs. According to a relative of the three men, two are of diminished mental capacity and the third was diagnosed with mental disorder that requires medication.

Corporal Kerry Howse, head of the Duncan RCMP’s First Nations Unit, said Desmond Peter’s file has been transferred to the BC Missing Person’s Centre in Vancouver for complete review with hopes that a fresh set of eyes may reveal clues. Howse said there have been no new leads in the Henry case, and it has gone to the RCMP’s Major Crime Unit in Victoria for review. The RCMP is investigating tips in the case of Everett Jones, said Howse.

All three cases are still open and being actively investigated, said Cpl. Howse, and all three families receive updates from authorities on a monthly basis.

But M. Patsy Jones disagrees. She said one family hasn’t heard an update for three months while it’s been nearly a year for the other family.

M. Patsy Jones is a Cowichan Tribes member. A mother, grandmother and tireless volunteer, Jones is no stranger to the trauma of having a loved one go missing.

Back in 1977 when she was still a small child, Jones’ older sister, in her early 20s, went missing. Back then it was family that went out searching, and it was family that found her sister’s remains in a rural area of Duncan, BC. Her sister had been murdered. “It’s a cold case; over the years evidence deteriorates but we still keep pushing forward, hoping to get answers,” said Jones.

Jones has spearheaded meetings and searches for the missing men. She does it because she is related to all three. “If I don’t do it, who will?” she asks.

With the help of a handful of relatives Jones and her team have searched from forests and trails around Mt. Tzouhalem down the rivers and rural areas in the Cowichan Valley all the way to the estuary of Cowichan Bay.

Jones has also been investigating leads and passing tips to the local RCMP. She brought her files to the update meeting and spent much of her time delivering information and fielding questions from the crowd, often times, speaking along with the RCMP spokesperson.

Following the brief RCMP update Cpl. Howse invited questions from the crowd. When asked if authorities believe the cases are linked, Howse replied that they have no reason to believe this is the case.

Cpl. Howse said the police don’t know what happened to the men, but he believes that the community is safe. “I’ve been here two years and I feel safe,” he said.

An elderly Cowichan Tribes woman took exception to Cpl. Howse’s comment, saying she doesn’t feel safe. “People drive by and throw rocks at our men and our women; our people go missing or get murdered. I don’t feel safe,” said Cathy Jim.

Jones confirmed that the drive-by attacks happen to Cowichan Tribes members and she urged people to report them immediately. “We get lots of leads but by the time we hear about it, the stories are weeks old,” she said. Jones said people need to take note of vehicle descriptions, license plate numbers and any other descriptions and report it as soon as possible so that the violent incidents can be acted upon.

“Yes, its unsafe and our chief and council of Cowichan Tribes have hired security who are working to help keep our people safe,” said Jim. She reminded people of the need to stick together and never let the youth go out alone.

It is incidents like these, and having no answers for their missing family members that make some of the people of Cowichan Tribes feel under attack.

“It is not easy to have a missing child,” said elder Myra Charlie. Her son, Everett Jones has been missing for nearly two years. “I keep praying to get them back,” she shared, before thanking all that are working to find the missing men.

“My son has been missing for 10 years,” said Elizabeth Louie. She went on to say that he would have had his 24th birthday in November and they would have done something special.

She said the Missing Person’s Center wants to do an age-progression image of her son based on photographs of him and his biological parents. The family is working on getting the necessary materials to the centre. “No matter where I go, I still watch for him; I look into people’s faces, always watching for him,” she said through tears.

Louie said it is this time of the year that they do something to remind people that he is still missing. It might be a walk or a candlelight vigil. “This time of year is important for me,” she said. She hopes more can be done to find him.

During the question and answer session, people asked about recent cases of missing people or human remains discovered in neighbouring communities like Lake Cowichan or the Malahat. It became apparent that answers were not readily available from the Duncan RCMP detachment because the cases were outside of their jurisdiction.

“Where is the collaboration on missing persons cases in adjacent communities?” asked Roxy Jones.

Cpl. Howse responded by saying that files go to Missing Persons Centres in Victoria and Vancouver where they look for similarities between cases and enter information into a database. “If there are similarities between cases, they will notify us,” said Howse. He went on to say that the RCMP deal with an average of three missing persons cases a night, but the people usually turn up.

The people put forth suggestions like raising the profiles of the missing men by including political figures like federal Justice Minister Jody Wilson-Raybould, BC Premier John Horgan and BC Chief Stewart Phillip.

Acting Cowichan Tribes Band Manager Cindy Daniels said that the message needs to get out to the public that these men are still missing. She noted that information conveyed in Crimestoppers bulletins give the impression that the men are just off somewhere like Vancouver and that there is no urgency. “We need to revise that message,” she said.

It was also suggested that the missing posters be distributed beyond British Columbia. M. Patsy Jones had some delivered to Alberta early on, because there was a time that people would go there to find work.

In an effort to draw attention to the cases, Jones brought her files to the MMIWG held Feb. 2016 in Prince George where she was able to meet with provincial ministers to talk about missing or murdered indigenous men. “They are fully aware that there are many (indigenous) men missing across Canada and I asked to have the men added to the list,” said Jones.

Jones knows that bringing First Nations chiefs together would help open doors. “They can help me, they can write letters,” said Jones.

For now, money is the main issue. “I pay out of my own pocket for fuel, food and whatever else is needed for the search,” said Jones.

In recent months Jones and her crew searched the river systems in the Duncan area. There are log jams along the river that couldn’t be disturbed by order of DFO because it is sensitive salmon habitat. Now that the salmon has spawned, DFO has provided the funding Cowichan Tribes needs to remove the log jams.

“I’ve searched along the river, slipping on logs and sinking in the mud until it was no longer safe to do so,” said Jones. She’s searched the forests along the way and if they saw anything that looked like a makeshift grave, they dug it up.

“Our family needs help; we’re feeling discouraged and losing sleep; we feel at a loss and can’t do this anymore,” said Jones. “I’m in a warm place every night with food in my stomach and clothes on my back but I don’t know what’s going on with my nephews.”

Jones thanked the chiefs and council for the assistance they’ve given.

Chief William Seymour said that his cousin is the father of Ian Henry and he knows the pain the family endures. “It is community support that keeps them moving forward,” said Seymour. He went on to say that Cowichan Tribes Fisheries staff had been working hard in the search. “They’ve searched the rivers and when the weather allowed, they dove the rivers,” he told the crowd.

Jones said she will continue searching, hopefully with the help of political leaders. She noted that more tips have been coming to her since the update meeting and they have been passed on to the RCMP.

“I’ve always said from the start that we are going to find them and bring them home,” said Jones.

If you have any information or have seen any of these men, please contact North Cowichan/Duncan RCMP at 250-748-5522. 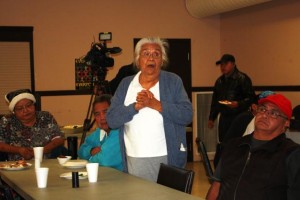 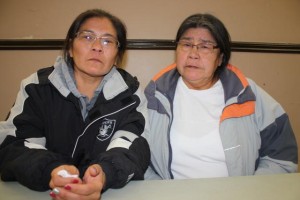