Over the weekend Angeline Frank organized the Suicide Awareness Open Basketball tournament at the Alberni Athletic Hall. She thanked those who helped her put on the event, including her father, John, and grandmother, Gloria Jean. (Denise Titian photos)

It has been about 10 months since 22-year-old Angeline Frank lost her grandfather to suicide and much has happened since.

Shocked and devastated by his sudden death, Frank, a young Ahousaht woman, spiraled into an abyss of depression. She felt devastated and alone, turning to alcohol to cope with the pain.

Despite having a busy life with work and school, Frank struggled with the emotional pain caused by her grandfather’s suicide.

There came a time when things got to a head and Angeline woke up in the hospital. It was then that her family staged an intervention. “They all told me how much they worry about me and how much they love me and how it made them feel that I was trying to do that,” she recalled. “It really opened my eyes to know that I wasn’t alone and that I really needed help and to find another way to deal with my grandfather’s death.”

Together the family made a safety plan. Angeline went to counsellors and took part in traditional healing practises with her grandfather’s brother.

“After that, I knew I wanted to bring suicide awareness to the forefront, but I didn’t know how to do it,” she said.

Frank bounced ideas around on social media, including hosting a suicide awareness basketball tournament for 2018. But the feedback and encouragement was so great that she decided, with the help of family, to pull the tournament together in two months.

Going with the theme ‘Everyone Matters’, Frank and her family hosted the Suicide Awareness Open Basketball tournament in Port Alberni from Dec. 8-11.

“I was really stressed about it because it costs so much money to host a tournament, but I did it and it was worth all the stress,” she said.

Besides working five days a week in her father’s restaurant and pub, Frank takes criminology courses four days a week and has recently taken on another job. With her already busy schedule Frank relied on the generosity of volunteers to get the tournament work done. She is grateful for all of the people who stepped up to help her organize and run the weekend tournament. “I couldn’t have done it without all their help,” she said.

Frank says she hopes the tournament will raise awareness about the issue of suicide and depression. She said she didn’t want to call it a suicide prevention tournament because, she pointed out, she can’t prevent suicide. But she wants to get the message out that everyone matters, they are loved and there is help.

“I don’t want people to feel alone and I don’t want them to feel the pain I felt from losing a loved one, because it happens so much and we need to stand together to help one another and let them know they are not alone,” she said.

Frank brought in inspirational posters and printed resource materials on suicide and depression to the tournament.

She wants people to remember that they have friends and family and there are lots of free resources and free helplines to call. “You can do a Google search to find help; I’ve even told people that they can call me, and I’ll be there to listen because I don’t take suicide lightly,” said Frank.

At the tournament Frank made a speech to remind the people that each and every one of them matters and that they are loved.

She chose a basketball tournament because it brings people of all ages together in a healthy, active way.

“Suicide affects many First Nations’ communities and it’s something that needs to change,” said Frank. “If I can just get the message across to one person that there is help, then it was worth it all,” she added.

There were nine men’s and five women’s teams signed up for the inaugural Suicide Awareness tournament. Frank said that more teams wanted to play but there was a shortage of referees that weekend. She hopes to have more teams playing in 2018.

Even though she was busy running the tournament, Frank managed to play with the Frank-Hunter team, which placed third.

Maaqtusiis Ma’as placed second against the Hesquiaht Descendants, who won the women’s division.

In the men’s finals the Maaqtusiis Suns placed first over the Wickaninnish Hawks. 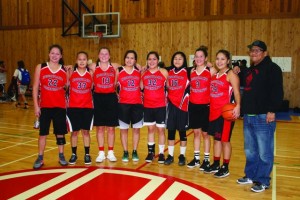 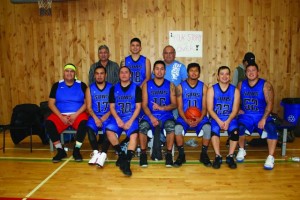 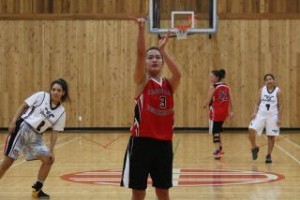 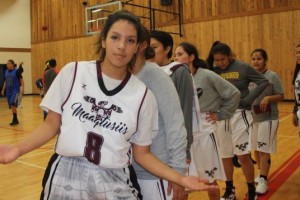 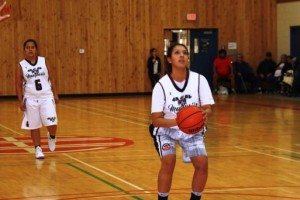