Excitement was in the air as the inaugural Nuu-chah-nulth Language Proficiency Certificate Program began its first day of classes at Port Alberni’s North Island College Campus on Feb. 2.

More than 50 people crowded into a classroom for what promises to be a challenging year of intensive study and practice. Besides the 33 registered students there were people of all ages, from a young Ucluelet Secondary School student and Nuu-chah-nulth language proponent Timmy Masso, to Kyuquot’s most esteemed elder, Hilda Hanson, who is in her 90’s.

There were representatives from almost all Nuu-chah-nulth communities and several elders in attendance.

Victoria Wells noted that there are many language programs out there, and all are valuable, but this one will be challenging in that the students will be working on speaking the language.

Wells is part of the Quuquuatsa Language Society (QLS) and has worked alongside her QLS peers Shawnee Casavant, Patti Frank, Jane Jones and Gerri Thomas to bring a university-accredited language program to Nuu-chah-nulth learners. After whirlwind of coordination and preparation, the first class of 33 registered students filled the desks, eager to begin their 12 months of studies. They will be working one to two weekends every month so that they can continue working at their regular jobs.

“We work hard with Uvic so that we could have our people teaching our people our way,” said Wells.

Casavant said she took part in a language program and earned a certificate after three years of study. While proud of her accomplishment she said that even though she can understand the language when she hears it, she still can’t speak it. “You guys are going to correct that,” she told the crowd, “you’re going to be the ones to have the language come out of your mouths.”

Ron Hamilton, Hupacasath, serves as one of the Nuu-chah-nulth language instructors. He said he is pleased to work with a group of so many people who want to learn. He acknowledged that he is not a language expert.

Hamilton asked the group if they knew the 1950’s television series The Lone Ranger. He shared how the Lone Ranger’s sidekick, a Native American man, spoke in broken English. After giving examples of how Tonto spoke, Hamilton admitted that sometimes he feels like his Nuu-chah-nulth language comes out the same way. “But I make no apologies for that,” he added.

He recalled speaking with a man from Hesquiaht who would listen to stories and teachings from his grandfather. But then there was a disconnect: a place called the residential school. According to Hamilton, when the man came back home from residential school, he could no longer understand his grandfather who spoke the central dialect of Nuu-chah-nulth. “The grandfather was only comfortable speaking about history, culture and family in the Nuu-chah-nulth language,” said Hamilton, hinting that the loss of language could impact the transmission of culture and history to the next generations.

For Hamilton, it is important that as many people as possible engage in learning the language. In fact, he told Ha-Shilth-Sa that he is not interested in handing out assignments and grading papers. “I don’t want someone to feel like they’re not doing as well as somebody else in this class,” he said.

The Nuu-chah-nulth Language Proficiency Certificate Program was developed through a partnership between the University of Victoria, North Island College and Quuquuatsa Language Society. It is being offered to Nuu-chah-nulth people, no matter what their level of language proficiency is.

Students will spend one to two weekends per month in Port Alberni to attend classes, finishing in December, 2018. Upon completion, students will earn a Nuu-chah-nulth Language Proficiency Certificate that can be used as University credit towards their degree programs.

Wells reminded the students that this course is a pilot project, meaning this is the very beginning of a university course. “We are constructing a new pathway and we will experience bumps along the way,” she warned.

She promised them that in eleven months they will be speaking more of the language than they do right now. Excited about the delivery of this new course, Wells smiled warmly at the class and told them, “The dream is real.” 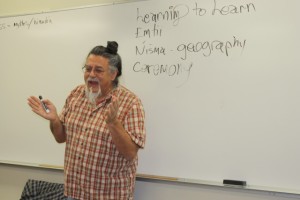 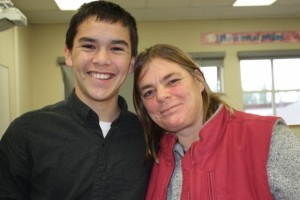 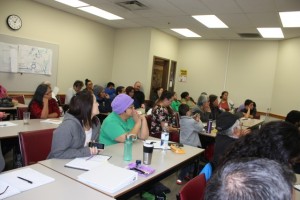 More than 50 people crowded into the classroom for the course's first day. (Denise Titian photo)