Lucas Sam is fitted with his new headband during the Tseshaht's 2018 Baby Welcoming on Saturday. (Shayne Morrow photos)

Moms (or grandmas or aunties) were invited to bring their babies for an introduction to Tseshaht culture, according to co-host Debbie Frank.

"This is moms coming here today to welcome their children into the Tseshaht community,” Frank said. “We will be making cedar headbands and drums. The drums will be a gift given to the baby – the dads will be making these drums to be given as a gift. And we will have the Protection Ceremony in the Longhouse."

Frank said it is critical for children to learn and practice their culture and heritage.

"This cultural event is part of their identity as a baby – the first stages of their life,” she said. “And the spiritual welcome is significant to their early years.”

Justin Dorward, a Southern Region wellness worker with Quu’asa, said baby welcomings were traditionally done in individual households. Now, partly in order to revive the practice, it has become more of a community event.

"It is us looking back to our old ways and embracing those things that make our communities stronger,” he said.

As part of his wellness work, Dorward employs traditional practices, such as brushings, to help the healing process.

"I always have my tools – my cultural gear – ready," he said.

Haahuupayak instructor Trevor Little said while it is important to consider the cultural significance of traditional events like baby welcomings, he believes it is more important to experience the gut reaction.

"I'm sure there is an exact reason for the coordinators to put these events together. But me, being there, it's more to feel it than to know it,” he said. “The feeling you get is 'support from birth.' It's about extended family, supporting the children. The songs, the standing behind them. It's a really good way to start, because some families don't actually get a chance to see that support.”

Little noted that with past wrongs, such as the residential schools and the Sixties Scoop currently gaining a lot of attention, Canada is seeing a strong resurgence of Indigenous culture.

"I think the public has to get ready for bigger and bigger things, with us regaining our culture. I feel confident in saying we are still in 'beginning' stages."

Little said he must be careful not to minimize the efforts of the great leaders of the past.

"Every generation had their own fight. The only reason we are able to fight ours is because of the work that was done before us."

But that being said, the healing feels like it is growing stronger as Canada's Indigenous Peoples reclaim their culture, Little said. So it is important to introduce children to their heritage as soon as possible. And that is what a Baby Welcoming is all about.

Gail K Gus has worked in prevention and intervention for the past 19 years.

In the most basic sense, Gus said the welcoming is a chance to introduce new parents to Jordan's Principle, to ensure they are able to access basic services.

"It's also about fathers having the opportunity to state their intention of what their role is going to be for their child," she explained, adding that this is critical in a system that, in the past, has put barriers between fathers and their children.

Gus said she likes to emphasize diversity in these sorts of events.

"I do pink, blue and white, because whoever your child develops into as they get older – should they be transgender, for example – I want people to encourage their child to be who they want to be in life,” she said.

Gus said it is critical for parents to be able, first to recognize, then to celebrate, the passages in their childrens’ lives.

As part of his participation, Doug Sam helped his grandson Alex create a drum, using a traditional tool – a rock – to hammer a punch through a tanned deer hide drum skin. Gaining confidence quickly, Alex completed the circle of holes, and then began threading them with woven cedar bark, to put an even tension on the skin.

Sam said it is important to do simple things like making eye contact with your children, even at the youngest ages. And he believes even babies experience that thrill that flows from an authentic cultural ceremony.

"Even at this age, they will remember that feeling,” he said.

Dawn Foxcroft and partner Martin Vliegenthart brought son Rhodes, who is nine and a half months old. Foxcroft said giving Rhodes a cultural identity is a priority. That means reinforcing her own skills, she explained.

"Right now, I am learning language myself. And I am trying to use all the language I know with Rhodes," she said. "We talk about food, and going to bed – the simple stuff.

"I am able to make sentences,” continued Foxcroft. “I have been an adult language learner for a number of years. It is important for me to be using as much language as I can around him."

In his opening address, Little reminded attendees that, “This day is about our young ones."

He then called for a moment of silence for lost loved ones.

The first order of business was to divide participants into the two tasks at hand: "moms" braiding headbands with cedar strands and "dads" making drums. In some cases, Little noted, it is not always possible to have both parents at hand, so stand-ins are always acceptable.

Dorward explained the sequence of the ceremonies to come, which would include the cedar rope ceremony. Gus noted there would be a gift bag for each mom and child.

"And throughout the day, we will share Lullaby stories," Lena Ross added.

Ross noted that she had recently attended a Baby Welcoming in Bella Bella, where the chiefs brought in the children, held aloft.

Little said it is critical to provide children with (appropriate) high-energy experiences.

“Babies feed off that energy. We are here welcoming them, and giving them that beautiful energy... those old teachings,” he said. "We honour our grandparents, and our hearts go out to our ancestors looking down on us. So much of what we do comes from our ancestors. We must open ourselves up to our ancestors, so our spirits will be guided.”

After the opening remarks and craft activities, Lena Ross led the moms and babies in a procession to the Longhouse for more songs and the Protection Ceremony. As part of the ceremony, Dorward brushed the moms and babies with eagle feathers. But it was the traditional rope ceremony that best symbolized the goals of parenting, he explained.

With parents and guests seated in a wide circle around the fire pit, Dorward conducted a braided cedar rope from hand to hand, until it completed a circle (actually, he did have to call a halt and quickly splice in an extra length of rope).

That rope is made of thin braided cedar strips, which allow for much greater strength and flexibility than a single thick strip. There is a lesson in that, he explained.

"We can be pulled in many different directions, and we can eventually break," he said. "But if you strap yourselves to your loved ones – to your community and your family – we surround ourselves and we become strong and tight. These ropes are what we used in whaling. They are strong enough to bring a whale in. And that is the strength our communities still need to this day." 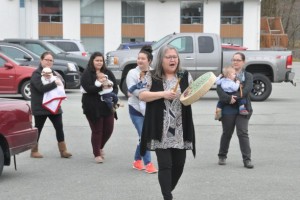 Lena Ross leads a procession of moms into the Longhouse. 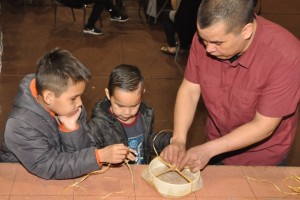 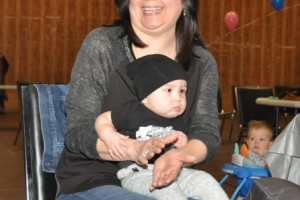 Jackie Watts with her grandson Emmett. 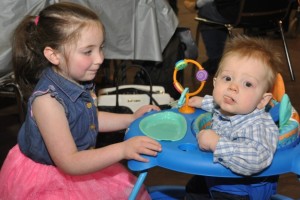