Animal rescue workers treat a dog in Tla-o-qui-aht Territory in an effort to control the spread of paro virus. (Carla Moss photos)

As Tla-o-qi-aht communities struggle with the outbreak of a deadly canine virus, the director of an animal rescue network is advising dog owners to keep their animals from roaming.

“There is an outbreak of parvo virus in Ty-Histanis/Esowista,” said James Rodgers, executive director and co-founder of the CARE (Coastal Animal Rescue and Education) Network. “There’s been over half a dozen fatalities and there’s just under 10 dogs in quarantine at this time.”

There have been no confirmed cases of the virus in the neighboring communities of Tofino, Ucluelet or Ahousaht, he added.

“It’s pretty bad, in that, quarantine can go on for quite some time,” said Rodgers. “The dog usually sheds the virus for 21 days after their infection is passed, so they have to remain quarantined to protect other dogs and the wild wolf population.”

Canine parvovirus is highly contagious and spreads from dog to dog by contact with their feces. Mortality can be very high and happen as quickly as 48-72 hours in untreated animals - especially in unvaccinated populations where the infection is active. Canine parvovirus may infect other animals such as cats and wolves, but it does not infect humans.

Signs of the disease generally start with lethargy (tiredness) and progress into loss of appetite for both solid food and fluids, to vomiting and diarrhea. Death is most often due to dehydration.

“If any of those things are happening it’s worth giving us or a vet a call,” said Rogers. “We want everyone to keep their animals close to home and not roaming the community because it spreads on shoes and on feet. The wolves are very susceptible to it and of course they can’t be vaccinated in the same way dogs can.”

Treatment for the virus generally requires hospitalization at a vets and rehydration, with early intervention providing the greatest chance for successful healing.

The only effective prevention measure is vaccination.

“The parvo virus can live outside for years, so really the number one preventative measure is vaccination,” Rogers noted. “Out here on coast, the further afield we are, the harder it is to get treatment necessary, so I can’t stress enough the importance of people getting vaccinations as soon as dogs are old enough. The vaccinations are usually good for three years. It affects all dogs and wolves as well, so we really need to be diligent out here to make sure everyone is up to date with their shots.”

On Monday, March 19th the CARE Network, in partnership with the SPCA, held emergency vaccination clinics in Ty-Histanis and Opitsaht.

“We got a high, high percentage of those dogs in the Tla-o-qui-aht communities, so we were very pleased with that,” said Rodgers, who feels good about the response to the parvovirus outbreak. “It’s been a really warm and neighborly approach to public health; it’s been a nice thing to be part of.”

Rodgers credits robust communication, both on social media and Tla-o-qui-aht’s internal messaging, with saving some lives.

On March 14 a successful search was held in Ty-Histanis to locate infected dogs who had retired to the woods.

Rodgers expressed gratitude to Dr. Holly Tillotsen from Port Alberni who is donating her time to come to the community for follow up vaccinations, to Ocean Outfitters who covered the costs of the vaccinations and the transportation to Opitsaht and to the crew of people who knocked on doors and searched the woods for infected dogs.

West coast resources available to those who require treatment or vaccinations include the Alberni Veterinary Clinic at 250-723-7341, which visits Tofino and Ucluelet once a month, and the CARE Network at 250-266-9663. 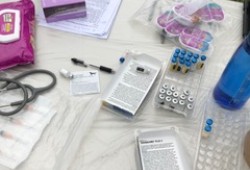 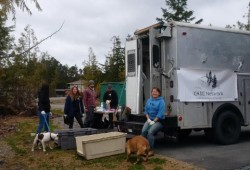