On the first day of spring, March 21, a shifting paradigm was revealed with the unveiling of a welcoming banner offering Nuu-chah-nulth words for the Tofino General Hospital: “Šaaḥyitsapaquwił”, (pronounced, shah yit sa pa qu wilth ) and translating to “A place where people go to get well.”   Šaaḥyitsapaquwił replaces the Nuu-chah-nulth word for hospital “Taaʔił łuuw̓as” (Ta/ilth/thloo/wus), which translates to a place to go when you are sick.

The unveiling of the banner celebrated the first ever traditional Nuu-chah-nulth cleansing of the TGH – marking the evolution of the relationship between the Central Region First Nations, First Nations Health Authority and the Tofino hospital.

As far as she’s aware, it’s the first time a traditional First Nations cleansing ceremony has been held at any facility on the Island, said Eunice Joe, the First Nations Health Authority’s regional manager for Vancouver Island.

“It’s very significant to acknowledge the ways of our people and bringing that into our health care centers,” she said.

“When I first arrived here last year there were definitely some concerns,” said Sherryl Hoskins, TGH’s rural site director, “that some of the community members did not feel that Tofino hospital was a safe place to go to and that made me really sad. A hospital is supposed to be safe and welcoming.”

“We’ve always been a huge part of this hospital,” Joe Martin of Tla-o-qui-aht reflected, “When the Meares Island court case began it was pointed out that the original funds for this hospital were, in part, secured from First Nations resources.”

Moses Martin reminisced about a fundraiser for TGH, a Tla-o-qui-aht cultural performance held in the early 1950s at the old community hall in Tofino across from Method Marine.

“It was really good,” he said. “People like late John Manson, Willie Manson and Andy Charlie were really strong singers then.”

So much life passes through the small community hospital. Some speakers, including Toquaht’s Leah Morgan and Ucluelet First Nation President Les Doiron said that they were born at TGH.  Some reflected on the much-appreciated care their loved ones received at the hospital in their last days.

“You looked after my mum for the last months of her life and she couldn’t have been in a better place,” said Tla-o-qui-aht Chief Councillor Elmer Frank.

In the moment of celebration, speakers recounted positive relations and experiences at TGH. Eunice Joe said that leadership at FNHA and VIHA, “acknowledged that FN experience in hospital has not always been very good and there have been experiences of racism.”

That acknowledgement has led to the formation of Cultural Safety Committees at facilities across Vancouver Island.

“And the TGH and the First Nations on the coast here have been one of the most active and progressive committees,” said Eunice Joe. “The work being done out here on the west coast is a prime example of the work we’re trying to do to improve those relationships, to improve service delivery, to improve the level of comfort our community members have when seeking medical attention.”

“I was here too on Saturday doing the cleansing, the brushing” said Ahousaht Chief Councillor Greg Louie. “It was a really awesome event for all, not just those that were doing the brushing. We were walking through every room and every level here in the hospital. Ryan here, was here on Saturday working. I could see him standing in the back there, observing, smiling, taking it in… and it was really, really  good to see the acceptance from our practitioners that are in the hospital and of course, a sign of reconciliation, working together.”

“Thank you to the TGH for acknowledging our traditional and spiritual leaders as an important part of the healing process. Kleco, kleco,” stated Toquaht Tyee Hawilth, Anne Mack, in a written statement read by Leah Morgan.

Hoskins arrival at TGH came on the heals of a very difficult year in the Central Region with many painful losses.

“One of the gifted healers also told me she could hear crying when she walked into the building,” said Hoskins. “So I am hopeful that the work we’ve done in the past year - the cultural safety meetings that happen on a regular basis and the sacred ceremony that happened this weekend and the cleansing of the hospital by the Elders and Healers - that they really helped to make TGH a safe place, a place where people go to get well.” 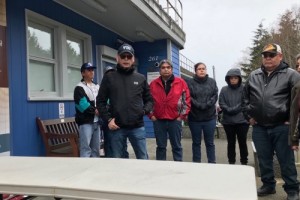 Chief Councillor Greg Louie from the Ahousaht delegation said, "The word unity is in community, the last five letters. That’s what its about. We come to support our people that are in the hospital and with the naming, the banner here."