Tseshaht members took part in an intensive five-day first responder course in the Tseshaht Hall from April 23 through 27.

While the main focus was on marine first aid training, the trainees would come away with a range of certification, according to instructor Candace Winter of Active Response Training.

A total of 17 Tseshaht members and three non-Tseshaht signed up for the course. When Ha-Shilth-Sa dropped in on the session on Thursday, students were undertaking a bonus course in the emergency use of Naloxone, used in the event of an opiod overdose. Francine Gascoyne and Kathleen Harris from the NTC Nursing Department delivered the training.

On completion of the Naloxone training, which was not part of the scheduled curriculum, Gascoyne advised that students would then be approved to train others in the use of the emergency kit. Naloxone kits are available through NTC Nursing, she advised.

Following the Naloxone training, students moved into a new phase.

“Let’s talk about transportation,” Winter said, laying out a spine board and a clamshell, which requires assembly according to the specific needs of the patient. “Has anybody here ever been strapped into a spine board?”

As it turned out, Cody Nielson-Robinson had been strapped into a spine board as the result of an accident. His experience was applied to the various rescue scenarios a first responder might face, some of which drew visible shivers around the room.

Trainees absorbed a full package of new skills over the five days.

“We get into everything from CPR (cardio-pulmonary resuscitation), primary care all the way to secondary,” Winter explained. “We deal with blood pressures and all your vital [signs], we get into taking samples for medical cases. We’re starting to introduce Spinal Care as well, so we’re getting into ‘clamshells,’ spine boards, half-backs, and different levels of extraction as well.”

Winter said spinal care has become more sophisticated over the years, but the fundamentals are the same. Down on the floor, trainees learned a range of techniques and tools to immobilize and protect a volunteer victim from further injury during the transport process.

“As long as we can keep them alive and transfer them to the next level of care… that’s the ultimate goal,” Winter said.  “From there, we can pass them off. And the more training you have, the better job you can do.” 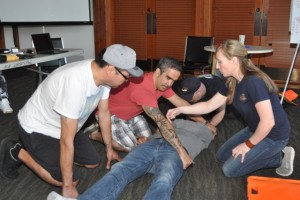 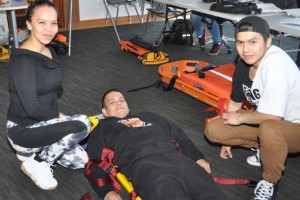 From right to left, Natasha Marshall, "victim" Colin Mack and Lonnie McPhee after completing an exercise. 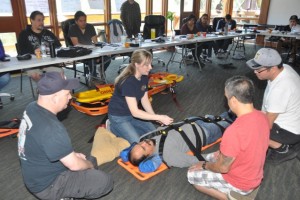