Today the Huu-ay-aht First Nations’ development of a micro-hydro project in its territory took a step closer to realization with a financial boost from the provincial government of nearly half a million dollars.

MLA Scott Fraser, who is B.C.’s minister of Indigenous Relations and reconciliation, visited the Huu-ay-aht’s government office in Anacla to present a cheque for $450,000 from B.C.’s Clean Energy Business Fund. This funding injection will help the Huu-ay-aht move on to the next stage of building the Sarita River Hydropower Project, said Elected Councillor Trevor Cootes.

“We have the complete project designed and have received all of the regulatory permits, this includes the nation’s legal requirements,” he said.

“It’s an example for the rest of the province in how to do it well, how to do it right,” added Fraser. “The status quo is not acceptable with this government, we have to change the way we work together in a government-to-government relationship in a true partnership.”

The run-of-river hydro project has been considered by the Huu-ay-aht for the last nine years, and underwent a series of consultations with a variety of the First Nation’s committees, noted Cootes. With a five-megawatt capacity, the project would harness a water flow capable of generating more power than would be needed by the nearby villages of Anacla and Bamfield combined. The Huu-ay-aht plan to sell this power to the BC Hydro electricity grid through a 40-year agreement, providing and average annual revenue of $2.2 million for the First Nation, said Cootes.

“We are working with BC Hydro to get an electricity purchase agreement in place, and it will provide us with the market security to ensure long-term viability of this project,” he said. “When we get this energy purchase agreement we can move forward with this project. It’s something that’s a good long-term investment for Huu-ay-aht and for the Bamfield community as well.”

Part of the project’s development has been consulting with members of the Huu-ay-aht community. Cootes observed that the protection of aquatic life and the environment were prevalent concerns.

“Two things that are immediately identified with citizens with any project within our hahoulthee is always going to be our fisheries values, and then the impacts to the environment,” he said.

The Sarita River project is being developed with the Barkley Project Group, a firm with a long list of First Nations run-of-the-river partnerships on the West Coast. The project entails installing large pipe, or pen stock, downstream from Sarita Lake. This placement will ensure a minimal impact on marine life, said Yuho Okaba, the Barkley Project Group’s vice-president of Project Development.

“The project is located between below the lake and Sarita falls, which is where what we call ‘the fish carrier’ exists,” he said. “There’s no upstream migration of fish above the falls. The impact to the aquatic ecosystem, especially the fish, is minimal.”

The pen stock would then extend approximately 680 metres downhill and underground to a single turbine generator.

Access roads to the site have already been built, and with a tentative completion date in 2020, the project’s construction is expected to last another two years. Okaba said Huu-ay-aht citizens will be first considered for the 10 or so constructions jobs needed over this period.

“The general contractor on the job will be contractually required to hire members first,” he said. “Maximum usage of Huu-ay-aht businesses and local businesses. Then where there’s a gap, we have to bring in expertise from outside.”

After construction, one of two full-time positions will be needed to operate the power plant. Cootes said the existing arrangement is designed to better empower the Huu-ay-aht economically.

“It just helps to build our community, because you’re cycling that money through and members are getting benefit from it,” he said.

The estimated cost of the project is at least $20 million, although these details are still being refined, said Okaba. This is more costly than some of the other run-of-the-river projects on Vancouver Island due to the dynamics of using a long pen stock over a lower drop in elevation.

“It’s slightly more expensive, because you’re using bigger pipe, bigger machines, more metal, just more mass,” said Okaba, adding that the investment is expected to pay off long after the 40-year electricity purchase agreement expires. “These facilities, if well-maintained, last 60 years or more. You would fully expect that from this power plant.”

The project could also be a backup power supply for Anacla and Bamfield, said Cootes, which can suffer outages of a week or two during the stormy winter months. The ongoing risk is trees being blown down onto the power line to Port Alberni.

“There’s a good opportunity that this type of project really reduces the impact of power outages during winter time,” said Cootes. “You’ll get winter storms and then you’ll get a lull for weeks, and then sometimes you’ll get subsequent big low-pressure systems coming in. Those are the ones that are damaging. The first one will knock down a tree then another one comes down, and it’s just a continuous bombardment on your land.”

Applications to the Standing Offer Program for clean energy projects is currently on hold as the provincial NDP government proceeds with the massive Site C dam project on the Peace River, but Fraser said that more opportunities will be available for First Nations to launch micro hydro projects.

“Out of Site C, the minister of Energy, Mines and Petroleum Resources has committed to put a framework in place for Indigenous procurement for clean energy projects,” he said. “Those options will be coming out this fall. That’s during the time that this full review of BC Hydro is underway.”

Fraser stressed that the Site C project was pushed forward by the previous Liberal government under Christy Clark, without proper public consultation or review by the B.C. Utilities Commission.

“I want to see more projects like this with First Nations, certainly with Nuu-chah-nulth nations and other nations,” he said. “There’s different types of power: this clean green energy that we’re about here with First Nations, that’s not the same as the firm power of a dam. You actually need the backup intermittent power…You can’t rely on it unless there’s firm power to back it up.” 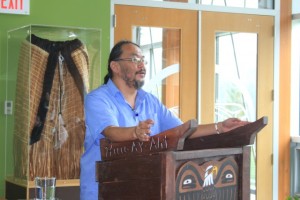 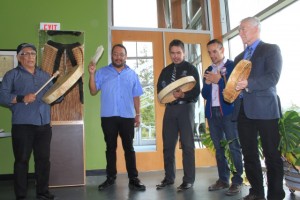