From May 9-11 students from the Eighth Avenue Learning Centre were exposed to the cultural significance of Vancouver Island's west coast, including a trip to Meares Island. (Richard Samuel photos)

Ten students from Eighth Avenue Learning Centre recently took a three-day field trip to the west coast to learn about Nuu-chah-nulth life and culture May 9-11.

“We set up this trip so students could re-connect with their culture, and to introduce our culture to the non-Aboriginals,” Samuel explained.

The group stayed at the Lone Cone Hostel and Campground on Meares Island, which proved to be an educational experience in itself.

Samuel explained that the complex was created from the Christie residential school through the Ahousaht Ha’wiith Economic Development Company. For many years, the site housed the Kakawis residential treatment centre, which was later re-located to the former Beaver Creek Elementary School in Port Alberni.

But the first stop on the trip was in Ucluelet, where they connected with SD70 Aboriginal team member Sarah Hagar. Hagar took them to Cedar House Gallery in Ucluelet, which is owned by Tla-o-qui-aht artist Hjalmer Wenstob.

That was followed by a little more exploration in Ucluelet, and then it was on to Tofino, and a water taxi ride to Meares Island.

The second day featured arts and crafts with Lisa Tremblay, followed by a nature walk with Jason Sam, the Nuu-chah-nulth education worker from Ucluelet Secondary School. To cap off the day’s activities, Kim Rai from the Quu’asa program delivered a one-hour session on wellness activities.

On the final day, the group took part in a whale-watching trip with West Coast Aquatic Safaris.

“I went on the trip and it was an amazing experience – kind of eye-opening,” said Cheyenne Edgar-Rupert, a Grade 9 member of Tseshaht First Nation who took part.

For Cheyenne, the trip to Cedar House Gallery was one of those eye-openers.

“The owner, Hjalmer Wenstob, showed us some really cool art, and he told us a story from his ancestor – how he used to use bull-kelp as a snorkel,” she said. “It was really cool.”

Cheyenne added that the nature walk was a major learning experience. Unlike your typical hike, the participants went in empty-handed.

“[Jason] taught us about some of the traditional foods you could eat in the forest,” she said. “We didn’t pack any snacks.”

The whole experience made Cheyenne feel more connected with her Tseshaht heritage.

“I think it’s really good to get to know your surroundings – your land,” she said. “Because, just in case, one of these days you might run out of resources and you’ll have to live off the land.”

Grade 10 student Raya Holcombe said she has no Indigenous heritage, but was eager to experience Nuu-chah-nulth culture.

“I really like to learn about other cultures. As I’ve told Richard, I’m really into anthropology,” Raya said. “They showed us an area where they found all these old tools that people used thousands of years ago. It’s really interesting to learn about how they lived, what they did, and what they’re doing now to keep their culture alive.”

“Jason showed us how to peel back a prickle-bush (salmonberry) spine and eat the insides of them,” she said.

Raya’s long-term goal is to pursue a career in anthropology, with a specialization in criminology, and educational experiences like the west coast expedition are a positive step in this pursuit.

While the trip was intended for Grade 9 students, Grade 8 Cole Petrie, who intends to pursue a career in marine biology, was a natural candidate.

“I particularly liked the nature walk,” he said. “Raya described how you can peel back the salmonberry skin – the newer growth – and eat it, which I have tried since then.”

Cole said he has found a major source of salmonberries near his home in Beaver Creek to indulge his new taste.

For Cole, the trip’s highlight was an up-close look at migrating grey whales.

“We learned about some of their feeding habits,” said. “How, when they come up to the surface, for about four breaths, then they go down to feed for about seven minutes. You can hear the breaths, and you can see the mist coming out of the blow-holes.”

Cole said this was his first close-up encounter with First Nations culture, and it had an impact on his view of nature.

“It is incredible that they have been here for so much longer than we have, and they have a much deeper knowledge of everything around us – a deeper connection with things European people seem to have lost over the thousands of years.”

Samuel said the whale-watching trip had another historical lesson.

That led to a lesson on how over-hunting almost eliminated the sea otter from the B.C. coast. Stocks were gradually re-established with animals live-captured in Alaska.

Anderson said that, while it was a team effort, Samuel was the driving force from the beginning.

“Richard, for me, was the ‘resident elder,’ sitting around the fire. There was this presence that he brought,” she said. “Richard has this way about him that pulls the kids in.

“I love to see all the kids grow together,” Anderson added. “Over a couple of days, relationships developed that might not have occurred. You put 10 kids on an island, they get to know each other.”

Anderson said Tremblay was the first choice to round out the team.

“I loved the three of us working together, and we all brought a different angle,” Tremblay said. “We sat down and made memory-bags in leather. We sewed. Some of the boys sewed for the first time. And we talked… so for a few days, we were our own little community where they had to help each other and interact with each other and form new connections with people.” 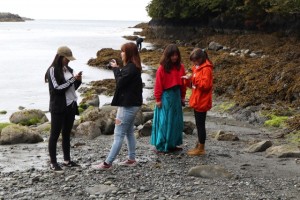