The Swan, a 36-foot steam boat built in 1890, was at the bottom of Sproat Lake for four decades. (Karly Blats photos)

Two boats with a rich history of serving on the Alberni Inlet will be the main event at the Port Alberni Maritime Heritage Gallery and Discovery Centre starting Saturday, June 16.

The Maritime Heritage Society will hold a grand opening for their newest exhibit; “Long Lost Ladies: The Swan and the Tatoosh II” on Saturday, June 16 at 3:30 p.m, following Port Day activities. The exhibit will take place in the Ken Hutchinson Building and will include artifacts from the two boats that are now housed on the compound, photos, stories, DVDs and newspaper articles.

The Tatoosh II, 16 feet in length with a 371 General Motor diesel engine, is a boom boat named after past Hupacasath musician and cultural teacher Edward “Tat” Tatoosh. The Tatoosh I was named after Edward’s grandfather, William Tatoosh, who was born in 1896 and became a boom-boat skipper. Many of William’s sons and grandsons followed in his trade, including Edward.

The boat was built in Nanaimo by Madil, has a fixed propeller at the stern and was first brought to Port Alberni in the 1950s to work on the construction of the Elsie Lake Dam. The boat also served on the Alberni Inlet for many years.

The boat ended up in the Port Alberni city works yard and was eventually rescued by members of the Maritime Heritage Society. Board member Paul McDougall, who found the boat half buried and laying on its side, thought it would be a good idea to restore the boom boat. With the city’s permission the society was able to obtain and restore the vessel. The boat received a new cabin floor and a new wood door.

One of the Tatoosh’s past skippers Geo Monrufet, Captain of the Lady Rose, said he admired the skills of the First Nations boom-boat skippers, who had patience and judgement required to maneuver them.

Similar boom boats can still be seen today working on the Alberni Inlet.

The Swan, approximately 36-feet in length, is a 126-year-old steam launch that was used on the Alberni Inlet to carry meat, passengers and mail to Bamfield. It can go a speed of approximately 5-7 knots at 60 pounds of boiler pressure.

“[The Swan] was built in 1890 and used to take loggers up and down the inlet. It took people to dances in Bamfield and it worked on Sproat Lake transporting food and boy scouts,” said David Cox, Maritime Heritage Society exhibit director.

Cox said the Swan ended up in the hands of Art Skipsey, former mayor of Qualicum Beach, in the 1950s.

“The boat was sort of dumped off on [Skipsey] by a guy who skipped town and then the boat was leaky and rotten and so [Skipsey] sank it to the bottom of Sproat Lake (in 1955),” Cox said.

The Swan remained on the bottom of the lake until Labour Day 1994 when Skipsey decided to pull it back up.

Divers used barrels as floats to bring the boat to the surface, taking three days to get it fully out of the water.

A major rebuild was needed to make it seaworthy once again. Most of the wood rot was found on the deck and the beams. Altogether there were 50 new ribs replaced, 120 feet of new planking and at least 1,000 new screws were installed. The floorboards and the forward cabin posts are original.

After restoration, the Swan received a new engine from a boat called “The Effie” that was used on the Hudson River in New York. Skipsey chose a wood-based boiler to install in the boat similar to the Robert boiler from the original.

“[The Maritime Heritage Society] had The Swan donated to us about four years ago by Skipsey and we built a cover over it and we’ve painted it and renovated it and put a walkway so the public can look at it,” Cox said. “We’ve also built a cradle for the Tatoosh as well and we’ve restored it to 1950s appearance.”

The public will have the chance to take a close look at both boats and learn about their history starting June 16. 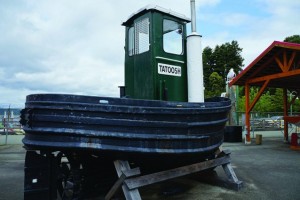 The Tatoosh II, 16 feet in length with a 371 General Motor diesel engine, is a boom boat named after past Hupacasath musician and cultural teacher Edward “Tat” Tatoosh.