Given the dangers of traversing the West Coast’s waters in modern, motor propelled vessels, it can be hard to imagine that for thousands of years the canoe served tribes as the main form of transportation. But groups from across coastal British Columbia and Washington State are about to get an intimate understanding of what their ancestors faced, as canoes embark on the water this month, bound for the Paddle to Puyallup destination in Tacoma, Wash.

This summer the Puyallup Tribe of Indians is hosting the annual canoe journeys event that Indigenous groups from the northwest Pacific coast have participated in since the late 1980s. In the second week of July many teams began their canoe journey from their respective communities, scheduled to land at the Puyallup’s home in Tacoma on July 28, where a potlatch is planned until Aug. 4.

“This is a significant cultural and spiritual event,” said Connie McCloud, the event’s cultural director. “Almost all of the canoes travel with youth and elders, so it really is a revitalization of our language, our cultural practices, our songs, our dances.”

A year ago members of the Puyallup Tribe took part in Tribal Journeys, an adventure that entailed over a month on the water to reach the final destination on Campbell River. McCloud said that the Puyallup group is following a no drugs, alcohol, tobacco or domestic violence policy to ensure a healthy journey for their canoe this year.

The dozens of registered canoes include participation from the Ahousaht, Hesquiaht, Mowachaht/Muchalaht, Tla-o-qui-aht and Tseshaht Nuu-chah-nulth nations. Two days before his group’s departure, Corey Anderson was overseeing the preparation of the Tseshaht’s canoe – or c^’apac. As they worked to hone the fiberglass layer over the underlying cedar strips, additional support came from Victoria, Nanaimo and Ahousaht.

Anderson said that after the Tseshaht purchased the c^’apac earlier this year, it became clear that a considerable amount of work was needed on the fibreglass layers, including figuring out how to ensure the fibreglass adequately sticks to the wood underneath.

“Initially there was a huge crack, it was a hole basically in one side of the canoe. It was in a storm and it landed on a log,” he said after a night of sanding the c^’apac until 3 a.m. “We managed to fix that, and then it was just fibreglassing from there.”

The Tseshaht took part in the canoe journey to Campbell River last year, but departed from Victoria. After their c^’apac is placed in the water early in the morning on July 12, the group of 10 paddlers – plus a skipper – will head to Keith Island in Tseshaht’s Broken Group. Anderson said that this marks the first time in at least 30 years the First Nation has paddled to this location in their hah=uu>i, where they plan to meet other Nuu-chah-nulth canoes before progressing on to their next landing at Bamfield.

As with other canoes in the Paddle to Puyallup event, a motorized support boat will follow the Tseshaht c^’apac, while a land crew travels ahead to prepare shelter and food at the next landing destination.

“They feed the paddlers and make sure that everything is taken care of by the time the paddlers get there,” said Anderson. “They’ll do laundry, they’ll do shopping.”

“Usually the host village will have a meal for everybody that’s coming in,” noted McCloud, adding that the groups will be in close coordination with the Canadian and U.S. coast guards. This rescue support was necessary in 2017 when a canoe capsized near Nanaimo.

“If there’s bad weather, we’re not on the water,” said McCloud. “We’re working closely with the Coast Guard. Everybody wears a lifejacket.”

But there might come times when members of the Tseshaht group intentionally hop into the water if the c^’apac is ever called a boat. This rule is being applied to ensure the c^’apac’s spirit is respected, said Anderson.

“Someone told me that each canoe has a spirit - it’s not just an object - so by calling it a boat, then you’re calling it a thing, and it’s not alive,” he explained. “When you carve a canoe from a log, it’s originally a tree. Each tree has a separate spirit to it, so that’s why you don’t call it a boat.” 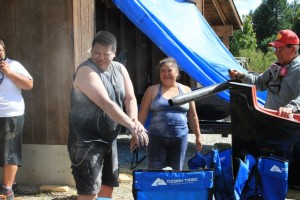 Melvin Good Jr. and Sharon Charlie step out of the shed for some air as they sand the Tseshaht canoe. The two travelled from Nanaimo and Ahousaht respectively to help prepare the canoe for the water.