Hesquiaht First Nation is counting on federal funds flowing its way this summer for a hydroelectric project to end decades of dependence on diesel fuel in Hot Springs Cove.

Chief Counsellor Richard Lucas said he met in mid-July with federal officials and pressed home the need for promised funding to complete the $13.7-million, run-of-river project on Ahtaapq Creek.

“We’ve got everything lined up, but we haven’t seen anything,” Lucas said. “We don’t have any news of it yet.”

Hesquiaht has so far received $1.3 million to build an access road using funds provided by the federal Clean Energy for Rural and Remote Communities (CEERC) program. Design and regulatory permitting have been completed and a boundary adjustment was obtained, allowing access through Maquinna Marine Provincial Park.

Lucas believes a $500,000 equity grant from B.C.’s First Nations Energy Business Fund — announced July 20 by Scott Fraser, the province’s minister of Indigenous relations and reconciliation — could expedite the federal funding component. Fraser alluded to that, suggesting the funds could help First Nations to access further funding through the Canadian government.

“It helps,” Lucas said. “If we had the money we would be able to carry on for the rest of the summer.”

That would give Hesquiaht and Barclay Project Group, project managers, a head start on facility construction next spring, minimizing impact of site preparation on birds by avoiding nesting season, he explained.

“Now would be a good time for falling trees and clearing the site,” he said. Construction would create 20 more short-term jobs and five permanent jobs once the plant is operational.

While Ottawa allocated $220 million for CERRC, the funds are spread over six years and remote First Nations communities across Canada are eligible.

Natural Resources Canada, which administers CERRC, indicated via email that applicants will be notified by late summer if their proposal has been selected. The intake process will continue until all funds have been allocated.

Hot Springs Cove is not connected to B.C. Hydro’s electrical grid and has long relied on diesel fuel supplemented by wood heat. Five Nuu-cha-nulth communities along the coast rely on diesel delivery from Tofino twice a month and it’s not unusual for winter storms to disrupt supply.

As one of the remote Nuu-chah-nulth communities, Hesquiaht has faced profound challenges over the years. The village had to be rebuilt after the 1964 tsunami, then forestry and fishing collapsed in the 1990s, driving away more members. About 50 residents live in the village year-round compared to as many as 200 who resided in Hot Springs Cove in the 1970s. The high cost of remote living and a need to obtain employment were common reasons for leaving, just as Lucas had to leave. He still returns to the cove about once a month.

There are other obvious advantages: Lower greenhouse gas emissions as well as reduction of generator noise and diesel fumes. It would also mean annual savings on diesel fuel in the range of $500,000 to $750,000.

“It’s costly for us,” Lucas said. “Once Hydro is up and running, we won’t have any reason for the generator to be running.”

Iain Cuthbert, president of Barkley Project Group, said federal funding is the next step but he can’t be certain when it will be confirmed.

“We’re in a bit of a holding pattern right now,” he said while noting that the project is scheduled for completion sometime in 2019.

Cuthbert cited high energy costs as rationale for creating a hydroelectric alternative. Diesel fuel costs $.86 a kilowatt hour, roughly eight times the cost of electricity available to most B.C. communities, he said. While classified as run-of-river, the facility will include a storage component to enable temporary supply.

“It’s an improvement in the quality of life over having diesel generators running all the time,” said Cuthbert.

“The project is strictly to provide a clean source of electricity,” while reducing greenhouse gas emissions by 67 percent, he added.

With 20 employees based in Nanaimo, Barkley Project Group has established a niche for working with First Nations, particularly in the case of hydroelectric development. Cuthbert doesn’t foresee any complications in constructing the power plant, expected to take 18 months.

“Whenever you’re dealing with remote areas it’s logistically challenging,” he said. “Nothing stands out as particularly unique about this project except that every community is unique. As you can imagine, construction costs obviously demand a lot of planning up front.”

Hydroelectric development in the watershed won’t have an adverse effect on fish because the power plant site is above a set of impassable falls, Lucas said. To the contrary, he hopes to see power development lead to salmon habitat restoration in the lower watershed. An old dam gave way in the 1990s, damaging chum and coho spawning grounds. 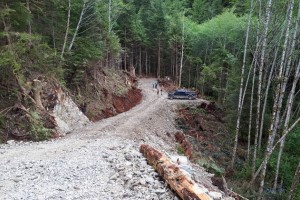 A completed access road for the small hydro power project.