Carving on the Edge Festival has commissioned Gisele Martin, Tla-o-qui-aht First Nation artist, and Fanny Aisha, a muralist from Quebec, to paint a mural depicting Tla-o-qui-aht history and culture.

Helene Descoteaux, Carving on the Edge Development and Project Coordinator has helped set up this project. Additional Sponsorship for this project has been provided by Clayoquot Biosphere Trust and BC Arts Council.

Opitsaht was the main winter home of Tla-o-qui-aht, and during spring, summer and fall tribal members traveled or lived in other areas of their Ha houlthe depending on what food and resources were available. Before the burning of Opitsaht in the late 1700s it had been recorded in log records of passing ships that there were many long houses, and those could house 50 to 200 people at once.

Also Included in the mural are the story of Son of Deer, an octopus, crystal, stars, birds and snails. The snail has a lot of significance that when observed can be used to teach about the weather. On each side of the painting are hands of side dancers which protect and give energy to the mural.

The teachings about the sea serpents say they were watchful and were used to correct things. Each sea serpent had different coloured eyes which people could distinguish as belonging a Ha’wilth.

Throughout the project there has been about 20 children and youth participating in painting of the mural, and about 50 adults have stopped by and engaged in conversation about what their perspectives are and what knowledge they may have or offer suggestions on what to add. Gisele and Fanny acknowledged Payton Williams, 7, who was very consistent and came every day to help paint. They also noted he was very detailed and concise is his painting.

During the participation the youth are learning about sustainability and respect. Levi Martin, TFN elder, taught the importance of listening with your whole being.

This mural will be used as a tool to teach people about the rich history of Tla-o-qui-aht that goes back in time, and about tradition and culture. The full story of the mural will only be shared with Tla-o-qui-aht members.

The mural will be on display during the Carving on the Edge on September 6-9, 2018 in Tofino.

After the showcasing of the mural, the artwork will be situated in the community of Ty Histanis. 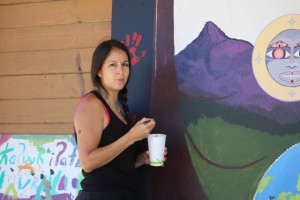