This month lahal was once again played evenings during the Tlu-piich Games, taking place at the Hupacasath House of Gathering. (Karly Blats photos)

The ancient traditional Indigenous game of Lahal, also known as stickgame, bonegame, handgame, was again a part of this year’s Tlu-piich Games.

Lahal is played throughout the Western United States and Canada by Indigenous peoples and has been a part of the Tlu-piich Games for many years.

Local Lahal expert Moy Sutherland Sr., who has been playing the game for decades, said although Lahal went on hiatus for many years during the Games, it’s being offered again for participants wanting to take part in fun games, or open games.

Lahal, dating back centuries, is played by two opposing teams that can consist of many players on each team or just two. The game uses two pairs of bones, one with a stripe or design and one without. A set of 10 scoring sticks are also used and a stick called a king stick that is won by the team that gets to start the game.

The scoring sticks are divided by the two teams and one team receives the four bones. The players with the bones hide them in their hands and a pointer from the opposite team will point in the direction that they believe the unmarked bone is. If they are correct, they take two of the bones but if they are wrong, they pass one scoring stick to their opponents. When a team guesses right and receives both pairs of bones, it becomes their turn to conceal the bones.

The game continues until a team runs out of scoring sticks, at which point the other team wins. Games can be quick or they can last hours. Sutherland Sr. said he once played a game that started at midnight and finished at 7:30 a.m.

There are many variations and nuances to the game of Lahal, like how many sticks are used, hand gestures and types of bones that are unique to different Indigenous groups

“Back in 1987 to the early ‘90s when all the Nuu-chah-nulth tribes came for the Tribal Games you’d have 200 (players) on each side easily, and now a days there might have been about 50 on each side,” Sutherland Sr. said.

Although Lahal can be considered a guessing game, Sutherland Sr. and his wife Jan say it also takes a lot of intuitiveness and perception.

“A lot of pointers don’t point right away, they’re trying to connect with the spirituality of the other person,” Jan said. “Another nuance is body language, so watching eyes, the way [a player] is holding the bones, are their eyes shifting. It’s not just 50/50 chance.”

Another important aspect to Lahal is the inclusion of singing, dancing and drumming throughout the game, which can help to distract the opposing team.

Lahal can also be a gambling game where people will bet money, or use more traditional methods.

“Traditionally for betting, my mom used to talk about when the men were out fishing or on trap line for the winter the women would have games against each other,” Sutherland Sr. said. “They didn’t have money, which wasn’t in a lot of supply back then, so they would bet things like kitchenware and dishes.”

Lahal is played tournament-style or for fun at gatherings and celebrations. It is meant to bring people together.

“For me, it’s a chance to get together with lots of family. A lot of my family play again, it went through a dry spell for a while but lots of my grandkids are playing,” Sutherland Sr. said. “Lots of friends come up. I’ve had friends playing from La Push, Saanich tribes, Duncan and Nanaimo.”

During this year’s Tlu-piich Games, Lahal was played at the House of Gathering on Wednesday and Thursday nights. 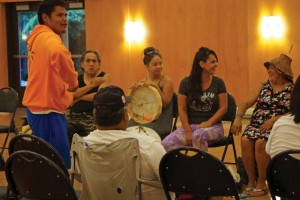