A carving of a thunderbird is unveiled at the Kuu-us Crisis Line's Adelaide Street location on Aug. 8. The event celebrated the service's 25 years of operation. (Denise Titian photos)

The Kuu-Us Crisis Line celebrated 25 years of service to the community with a small gathering held at their Adelaide Street location on Aug. 8.

Elia Nicholson-Nave, executive director of the Kuu-Us Crisis Line Society, has been there from the beginning. The 24-hour crisis line was launched in August 1993 after a rash of suicides and attempts among First Nations youth, prompting leaders to come up with solutions. Nuu-chah-nulth leaders met with service providers and concerned community members and began working on launching a 24-hour crisis line service for Aboriginals.

The service has grown to include a separate line for adults and is now delivered to the entire province of British Columbia. Nicholson-Nave said that the Kuu-Us Crisis Line model has set a high standard and is about to go nation-wide.

The society’s operations are directed by a Board of Directors with June Graham serving as chairperson. Besides seeking out funding to keep the services and programs running, the executive staff reaches out to network with other service providers in the community to look for ways to meet the needs of the people.

The 24-hour crisis line is manned by trained volunteers.

In addition to crisis line services, the society has expanded its programs to include housing search assistance for low-income or homeless people, food hamper services, free clothing and household items for those in need. The free items come from generous donations from the community. Groceries come from patrons of local grocery stores who leave their donations in a drop box inside the store.

In keeping with its First Nations beginnings, the Kuu-Us Crisis Line celebration began with a Nuu-chah-nulth prayer led by Ditidaht elder Geraldine Edgar, followed by a welcome from Tseshaht First Nation. The word kuu-us means people in the Nuu-chah-nulth language.

Geraldine Edgar of the NTC Quu’asa program talked about the Nuu-chah-nulth way of life and the importance of praying for people.

“Some of them may have lost their way, and even they don’t think they need it, we pray for them,” she said, adding that she is thankful for the gifts in life, including family and the programs and services that help people.

Following lunch Nicholson-Nave acknowledged several people that contributed to the success of Kuu-Us Crisis Line Society, including past and present board members, staff and volunteers. Several people were blanketed as a sign of gratitude for their work with the society.

Among the people being acknowledged for the successes of the Society were hospital Aboriginal Liaison workers Vanessa Gallic from West Coast General Hospital and Monique Pat of Royal Jubilee Hospital in Victoria, B.C.

Patients needing continued help are connected to appropriate support services so that they don’t fall through the gaps.

Both British Columbia MLA Scott Fraser and federal MP Gord Johns were thanked for recognizing the importance of the work that the society does and for their efforts in keeping government funding flowing to the society.

The City of Port Alberni was acknowledged for their continuous support as well as former staff members Lisa Gallic and Tanya Buxton for their services at the society during the early years.

The highlight of the event was the unveiling of a carved thunderbird created by artist Andrew Mack. Nicholson-Nave said the carving was commissioned to commemorate the anniversary and to celebrate the property that now serves as a home base for Kuu-Us Crisis Centre services.

Andrew Mack told the crowd that the thunderbird is the most powerful Nuu-chah-nulth being and he was inspired to carve one because of the powerful work that the society does for all people. The wooden sculpture, a thunderbird dancer, stands on the property facing Johnston Street.

“Carving thunderbirds helps me stay on the path to better choices,” said Mack.

June Graham thanked Elia Nicholson-Nave for her dedication. “She has given so much of herself to make it a success. She’s amazing. Without her it would be what it is today,” said Graham. 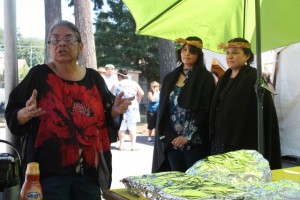 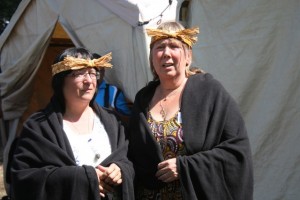