Travis Thomas posted this picture of himself on Bartlett Island in 2017, one year before he was to go missing from the location this summer. The Ahousaht community is continuing their search for the 40-year-old. (Facebook photo)

The search is on for a missing Ahousaht man following his disappearance from a small island near the community.

RCMP Corporal Tammy Douglas confirmed that the RCMP is currently searching for a 40-year-old Ahousaht resident on Bartlett Island.

“Travis Thomas was last seen on Bartlett Island near Ahousaht at approximately 4:30 pm on Aug. 7,” said Corporal Douglas in an email. Travis Thomas, a father of four, is described as fit, with an athletic build.

Thomas, a life-long Ahousaht resident, is well-known and well-liked in the community. He is known for his athleticism. Thomas started out playing basketball and running marathons in his youth. He went on to coach Ahousaht youth basketball teams and promoted running programs in the village. Thomas’ photograph is being published with the permission of his mother, Jean C. Thomas.

According to sources, Thomas was taking part in a cultural healing practice that involves solitude. He was reportedly brought to nearby Bartlett Island south of Flores Island just days before his disappearance. Sources say there was another man staying on another part of the island.

The community of Ahousaht was notified of Thomas’ disappearance in the early morning hours of Aug. 9 and volunteer searchers were immediately dispatched.

According to Alec Dick, Ahousaht Emergency Response Team Coordinator, more than 75 volunteers have taken part in the search.

The RCMP confirms that dozens of people are searching both on land and on the water. Besides local search and rescue teams, the Canadian Coast Guard, Marine Search and Rescue, Tofino ground Search and Rescue, RCMP helicopter, RCMP Police Dog Service and drones have also assisted in the search.

The search is still ongoing.

“We acknowledge the strong, tireless volunteers of Ahousaht, Hesquiaht and Tla-o-qui-aht and the R.C.M.P.,” said Dick in a written statement. He went on to say that the Canadian Coast Guard participated in the search for one day.

Dick has been active in the latest search despite his own family’s loss. Less than three weeks before Thomas went missing, Richard Amos, age 23, disappeared after leaving in a canoe to go fishing.

Amos, from Kitimat, B.C., married Dick’s granddaughter, Kaitlynn Tom in a cultural ceremony on an Ahousaht beach in September 2016. The couple lived in Ahousaht with their two small children.

On Sunday, July 22, at about 11 a.m. Amos left the beach in a canoe to fish for an hour or two. When he failed to return a few hours later, search parties went out looking for him. The RCMP and the Canadian Coast Guard took part in the search.

Katelyn Moores of the Joint Rescue Coordination Centre based in Victoria B.C. confirmed that the canoe, a paddle and some personal belongings were located in the water. The items were found the same day, July 22, near Shot Islets, just south of Flores Island and in the same area as Bartlett Island.

The official search for Amos was stood down on July 30, but family has not given up hope that he will be found.

“On behalf of A.E.R.T (Ahousaht Emergency Response Team), leaders and coordinators, we would like to offer our prayers and support to the Thomas/Frank families,” said Dick in a written statement.

“Just three weeks ago we were in the same situation, searching for Richard Amos. We also offer our prayers to Richard’s wife Kaitlynn and their two children,” he continued. “We want the families to know A.E.R.T. never quits. We believe in hope. We believe in our Creator and we will not quit.”

Ahousaht members are especially grateful to their neighbors, the Tla-o-qui-aht, for joining in the search for Amos and Thomas, even after the intensive search for three of their men that went missing June 15.

In the early morning hours of June 15 cries for help were heard in the Duffin Cove area of Tofino. When searchers went out they found one man from the water just south of Felice Island near Tofino and another had made it to shore at Duffin Cove. Both men were not from the Tofino area. They had been aboard an open 20-foot aluminum boat with three Tla-o-qui-aht fishermen, Marcel Martin, Carl Michael and Terrance Brown Jr. when it capsized near Duffin Cove.

Dozens of volunteer searchers, both local and from neighboring communities took part in the search.

The boat and some debris were located over the following days.

On July 18 a kayaker discovered human remains in the water near Echachist Island. Later that month the BC Coroner confirmed that the remains were those of Marcel Martin, a married father of three.

Carl Michael and Terrance Brown Jr., both young fathers, remain missing. A Go-Fund-Me page has been set up for the benefit of the Tla-o-qui-aht men’s wives and children.

While the official search for the missing Tla-o-qui-aht men has been stood down, local fishermen and tour operators are keeping an eye out for anything unusual, said elected Chief Moses Martin in a phone interview with Ha-Shilth-Sa.

In Ahousaht, exhausted volunteers continue the search for Travis Thomas.

The Ahousaht Emergency Response Team, led by Alec Dick is coordinating the search. They are looking for food/refreshment donations and people to help search. 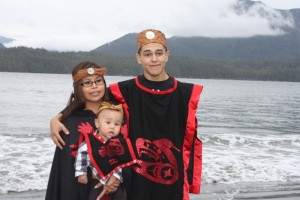 Ahousaht resident Richard Amos, pictured here during his wedding in 2016, went missing after he took a canoe south of Flores Island July 22. This picture is being published with permission from his mother in law. 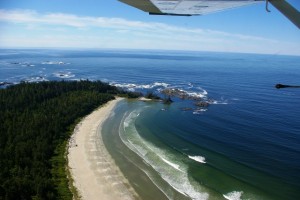 Both men went missing in the area southwest of Flores Island.