A totem pole carved by Joe David will be on display at the Carving on the Edge Festival, which runs Sept. 6-9 in Tofino. (Nora Martin photos)

Tla-o-qui-aht- Joe David, 72, met with the Tofino District Council Members and offered to carve a totem pole in honour of the Ha waiih (hereditary chief).

What inspired Joe to carve the totem pole Is the fact that within the town of Tofino there is a lack of Tla-o-qui-aht art work displayed. With every year over one million tourists visiting Tofino, David saw the importance of sharing the history of Tla-o-qui-aht through the expression of art.

After the Ha waiih donated the log, Joe began preparation and cleansing of the 15-foot totem pole in May, completing it August.

Carvings on the totem pole include Ray Seitcher’s granddaughter, Si Houpa (Senen Seitcher), the four-year-old daughter of Marisa Swan and Chris Seitcher who represents the future. Also on the pole is a whale and a thunderbird, which represents the whaling chiefs. There are two pumps on the pole representative of Winchee and Hilth poois mountains, situated about 65 kilometers around Sutton Pass along the Tofino Highway.

Historically the totem poles were used as a teaching tool as the Tla-o-qui-aht had no written language. The totem pole’s significance was used to document the history, natural law and Tla-o-qui-aht constitution.

It was during a potlatch that the Ha waiih’s speakers spoke at great length about the teachings and practises of the Ha waiih. During the totem pole raising ceremony a name was given to the pole.

Joe also added that when a Hukum (queen or high-ranking woman) married she sometimes was given songs and dances that were mentioned during teachings of screens, masks and totem poles.

Joe started carving as a young boy and stated his role models were his late dad Hycinth David, his uncle George Thompson and Wilson Williams of Dididaht.

Joe and his daughter Marika Swan traveled to museums in New York and Chicago, and it was there that Joe said he could identify the artwork of Tla-o-qui-aht by the detail and style of masks, screens and poles that were confiscated from the village of Opitsaht during the 1940’s. The artwork in the museums date back to the 1800s.

The Ha waiih and the Tofino District Council were present for the unveiling of the totem pole at Joe’s residence in Ty Histanis on August 16.

The Tofino Council has agreed to be caretakers of the Totem Pole. The pole will be placed on 3rd Street across the new RCMP building that is currently under construction.

The totem pole raising event will take place on September 7, starting at 2 p.m. Transportation will be provided for Opitsaht, Esowista and Ty Histanis, and dinner at 5 p.m. at the Tofino Community Hall. 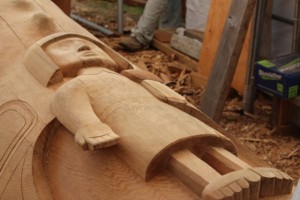 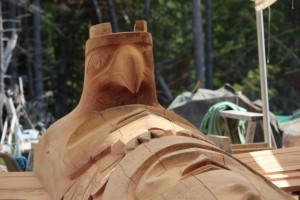