An aerial view looking over the intact McKelvie Valley from above the town of Tahsis. (TJ Watt photo)

In an alliance that would have been almost inconceivable 20 years ago, the Village of Tahsis has sided with conservationists, pressuring the provincial government to block logging of a watershed near the community.

Western Forest Products (WFP) planned to begin road construction into the McKelvie Valley but informed the village in July that it has deferred logging for a year or more in response to local concerns, a delay that residents hope will buy them more time to make their case.

Tahsis, which swells to a population of about 1,000 in the summer, wants the watershed removed from WFP’s tree farm licence in order to head off road construction, logging or any form of resource extraction. Since WFP closed its Tahsis mill in 2001, the town has staked its economic fortunes in eco-tourism and recreational fishing for the most part, not logging.

Acting Mayor Randy Taylor said a new economic reliance on tourism is among key concerns they’ve conveyed to Forests Minister Doug Donaldson. They want the provincial government to exercise its authority to remove the watershed from WFP’s TFL 19, which encompasses 190,000 hectares in the vicinity of Nootka Sound.

“They could remove one of the few remaining virgin valley bottoms on the Island,” Taylor said. “Why they don’t have any willingness to do so is beyond my understanding.”

Village councillors have met with WFP representatives over the past year about its plans. Prior to the delay, the company expected to begin road-building into the valley as early as next year to start logging in 2020. In June, council took a firmer stand, voting unanimously to oppose all forms of extraction and development in the watershed.

“They (WFP) recognize that we’re serious, that we intend to hold their feet to the fire in terms of responsibility,” Taylor said. “A lot of our concern has been qualified by a hydrologist who did the last study of the watershed. That was someone they hired.”

Tahsis and the watershed in question lie within Mowachaht/Muchalath (MMFN) and Nuu-chah-nulth territory. However, MMFN’s Council of Chiefs has not formalized any position on the proposed logging at McKelvie Creek. Their major concern has been a five-megawatt hydroelectric project, proposed for McKelvie Creek by Synex Energy Resources Ltd, an independent power producer.

Over the past several years MMFN has voiced concerns to the provincial government about the potential impact of the hydro project on MMFN fisheries. So far, the government has issued a water licence and land tenure for that project.

“As we informed the village in July, we have delayed our plans for at least a year in order to provide us more time to better understand the (Tahsis) council’s concerns and to take these into consideration as part of our forest management in tree farm license 19,” the company noted in an emailed response. “We take our responsibility for sustainable forest management seriously and we will continue to engage with them on this matter.”

Andrea Inness, forest campaigner with Ancient Forest Alliance (AFA), has a different interpretation. She said the delay stems from a government timber review planned for some time.

“It was already in the works,” Inness said. “It’s not a response to local opposition and it encompasses the entire TFL.”

The deferral is positive news since it allows for more time to lobby the provincial government, she acknowledged. That’s what the village council hopes for at next month’s convention of the Union of B.C. Municipalities, an annual gathering that allows local politicians a chance to speak directly with cabinet ministers.

Ministry staff are meeting with Tahsis representatives within the next few weeks to discuss their concerns in detail, though a response to Ha-Shilth-Sa’s questions from a ministry spokesperson offers no encouragement.

Registering their concerns, residents formed the local advocacy group McKelvie Matters, a group also allied with conservation groups including the AFA, Wilderness Committee and the Sierra Club of B.C. Conservation groups are asking the NDP government to honour an election commitment to adopt sustainable forest practices and greater protection for so-called “hot spots” of old-growth forest, intact valleys such as the McKelvie with high conservation and recreational values.

Martin Davis, a biologist and co-founder of McKelvie Matters, said logging the valley threatens the health and safety of the community as well as the integrity of the forest habitat.

“It will destroy groves of huge Douglas-fir, remove much of our remaining regional marbled murrelet (an endangered seabird) habitat, damage our premier hiking trail, and will leave scars directly over town that will take generations to heal,” Davis said.

Taylor said he’s not encouraged by the WFP deferral since he sees a consistent pattern in their dealings with WFP through the years. However, the company told the village that the province has signed off on the harvesting of the watershed’s old growth, trees that must be removed to access other timber in the valley. The company insists it will still preserve the integrity of the watershed, “but only insofar as the current regulations require them to,” Taylor said

“Unless we get more people on board, I don’t see that happening,” he said. “We’re working towards some sort of stable future for the area, but corporate profits come first. I expected better from the NDP.”

The acting mayor would be more satisfied if the Mowachaht/Muchalaht were to log the watershed, “though that’s never going to happen.”

Indeed, MMFN has its own forestry company, the focus of which is smaller-scale, sustainable logging that maintains a strong connection to its lands.

There is a shifting dynamic, however, resulting from the area’s growing reliance on tourism.

Two years ago, MMFN signed a mutual vision statement with the village and nearby Gold River.  The agreement recognizes a shared commitment to responsibly manage natural resources “in a manner that will stimulate new business opportunities and develop a diversified economy.” 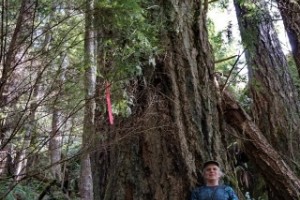 Old-growth Douglas-fir tree on the slopes of the McKelvie Valley. (Martin Davis photo)