Paintings of Nuu-chah-nulth youth when they were residential school students were on display last year at the Legacy Art Gallery in Victoria. Pictured from right to left is the work of Phyllis Tate (Ditidaht), Mark Atleo (Ahousaht), Dennis Thomas (Ditidaht), Charles August (Ahousaht), and Jeffrey Cook (Huu-ay-aht). (Holly Cecil photo)

An art exhibit featuring drawings made by Nuu-chah-nulth youth when they were residential school students decades ago will once again soon be on display in British Columbia.

Bradley Clements, who recently graduated with a Master’s degree in Anthropology from the University of Victoria, said the public will soon be able to see those drawings in the province’s largest city. They include works from Phyllis Tate (Ditidaht), Mark Atleo (Ahousaht), Dennis Thomas (Ditidaht), Charles August (Ahousaht), and Jeffrey Cook (Huu-ay-aht).

“The next exhibit will be at the Museum of Vancouver, near the end of this year,” said Clements, who during his Master’s studies worked on a project interviewing residential school survivors, and some of their family members, from the Huu-ay-aht First Nation, Ahousaht First Nation, Ditidaht First Nation and the Uchucklesaht Tribe.

The drawings were made in the late 1950s and early ‘60s, when the individuals were attending the Alberni Indian Residential School in Port Alberni. These pieces of art were repatriated in 2013.

“Many of those individuals wanted to use their childhood drawings to build more dialogue,” said Clements, a Victoria resident who is non-Indigenous and has Scottish and English ancestry. “They chose to publically display their paintings.”

The drawings were featured in an exhibit last year at the Legacy Art Gallery, located at the University of Victoria.

Clements, who completed his Master’s studies in August, started working as a curatorial intern at the Legacy Art Gallery earlier this month.

“A lot of the paintings depicted a lot of childhood memories of home,” Clements said. “There was quite a lot of diversity, like fishing boats or fishing. And some of them were landscape scenes.”

The drawings were also shown publically for the first time in 2012 at the Legacy Art Gallery, a year before they were given back to the residential school survivors. They were on display at the Alberni Valley Museum in Port Alberni during 2014 and ’15.

Though the paintings are not actually there, since last year a permanent exhibit about them is located inside the Canadian History Hall, which is part of the Canadian Museum of History in Gatineau, Que.
Instead of featuring the actual paintings, the display at the federal museum includes video interviews of the survivors and family members discussing their works.

“They’re in relatively good condition,” Clements said of the original drawings. “Part of the reason they weren’t shown at the federal museum though is that they’re not strong enough to be displayed for 20 years, which is what would be expected (for a permanent display).”

During his research Clements was unable to determine exactly how old the students were when they drew the pictures.

“They were a variety of ages,” he said. “Some of them were teenagers, some as old as 16. And others were quite young, like six or seven or eight. I don’t have the exact ages of them though.”

Clements is rather impressed of the decades-old work.

“They were done on big newsprint sheets, about two feet by three feet,” he said. “They’re fairly big and quite striking.”

The drawings were made with poster paint and the newsprint paper.

He believes the drawings were preserved rather well, as they were in garbage bags for a number of years, away from sunlight and moisture. Clements is obviously pleased his Master’s work brought attention to these drawings.

“My research is about their experiences and to tell their stories,” he said.

Clements is hoping other museum professionals are drawn to these stories and choose to also have exhibits with the drawings in the future.

“The survivors are wanting to continue showing their work in diverse settings,” he said.

Clements believes it won’t be long before the drawings will be shown elsewhere, after the exhibit at the Museum of Vancouver.
“There’s not concrete plans that I am aware of yet,” he said. “But there is interest from other museums.

They have indicated they want the exhibit to travel more broadly.” 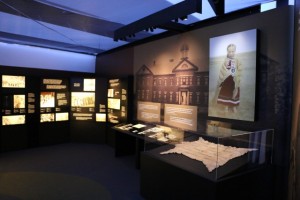 The permanent display at the Canadian History of Museum including videotaped interview of Nuu-chah-nulth residential school survivors. (Bradley Clements photo)