A small group of students and teachers took some time on Sept. 28 to learn about First Nations’ experience in residential schools through the NEW (Nuu-chah-nulth Education Worker) Richard Samuel.

Samuel said this is the third year he’s organized activities for students and staff to raise awareness of the legacy of Canada’s Indian residential schools. Each year he holds class discussions followed by the creation of a commemorative banner that is usually put on display in Port Alberni. His students are Grade 9-10 Alternative Education students, some of whom are Nuu-chah-nulth and have direct knowledge of the legacy of Indian residential schools.

“I have a few people in my family that went but they don’t talk about it much – it’s a really difficult subject,” said student Cheyenne Edgar. She said she’s read about the subject in books and also learns about it in her social studies classes.

Teacher Seana Wright said that she has been teaching First Nations history in her social studies classes for four years and she’s noticed that every year, more and more kids become aware of the legacy of residential schools. She said it is important to know the history because it is about social responsibility, peace and making a difference.

The lesson started with a pancake breakfast followed by a brief history on why residential schools were instituted and by whom.

“A man named Duncan Campbell Scott created the policy that was supposed to kill the Indian in the child,” said Samuel.

Assimilation involved forcibly taking children away from their parents to 'civilize' them in residential schools until they were eighteen. But it didn’t work and Canada’s Aboriginal people retain much of their culture and language. However, damage has been done and people continue to heal from the legacy of residential schools.

Samuel showed a video clip of TRC (Truth and Reconciliation Commission) Commissioner Murray Sinclair who said First Nations people are often asked why can’t we just get over it and move along.

Sinclair asks, why can’t we just remember them (residential school children)? Everyone remembers war veterans, 9/11 and events like that.

“(We don’t forget) because it is important for us to remember; it is our history and we learn from it and we should never forget it,” said Sinclair.

In a recent message from Assembly of First Nations National Chief Perry Bellegarde, Orange Shirt Day and the idea of reconciliation was explained. Reconciliation, he said, means learning about one another and our shared history.

“It is sharing, growing and succeeding as a country together, for our children. It is about closing the gap in terms of quality of life between First Nations and the rest of Canada. It is learning to live together and work together respectfully,” said Bellegarde.

“By wearing orange shirts on Sept. 30, we are helping to tell the story of Phyllis Webstad, whose brand new, favorite orange shirt, given to her by her grandmother, was taken from her on her first day at the residential school,” said Bellegarde.

He went on to say that residential schools were very harmful to children, families, languages and First Nations culture.

“When we wear orange shirts on this day we are reminded of the many First Nations children that were taken away, and we are telling the world that every child matters,” he said.

“We can’t change the past but we can all be a part of changing the future,” Bellegarde concluded. 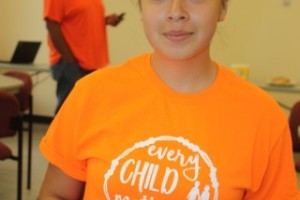 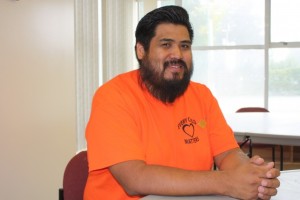