Huu-ay-aht drummers and dancers put on a show for the Tour de Rock welcoming dinner at the Alberni Athletic Hall on Sept 28. (Mike Youds photos)

Dozens of Huu-ay-aht First Nations volunteers packed up their families and hit the road to Port Alberni last weekend to host a welcoming dinner for cyclists midway through the Tour de Rock.

The rolling fundraisers arrived in the valley Friday afternoon after pushing over the Hump from Parksville. At that point in their 1,000-kilometre route they had happily nicknamed it “the Sunshine Tour.”

“It’s fantastic,” said Rob McDonald, a member of the support crew. “We lucked out on the weather.”

They had the advantage of a sunny week for the first legs of a two-week tour, which started in Port Alice on Sept. 22 and will wheel its way to a grand finale Oct. 5 in Victoria. Rain caught up with them Sunday after they left town headed for Nanaimo.

Raising funds for pediatric cancer and research, the tour turns 21 this year. Cops for Cancer, a group started by Edmonton police officers, wanted to go beyond charitable head-shaving. In collaboration with the Canadian Cancer Society, they came up with the concept of a cycling tour that would connect with community giving.

That first year they raised $325,000. This year the two-week tour visited 23 Vancouver Island communities and is on track to reach the $25-million mark, McDonald said.

“The Huu-ay-aht and the people of the valley welcome you here today,” said Al Ross (Kaa-nowsh), hereditary chief.

Edward Johnson, who administers the Huu-ay-aht First Nations culture and wellness program, served as MC. He passed the cyclists at Cameron Lake on his commute over the Hump on Saturday.

“It almost brought a tear to my eye because they were so well organized,” Johnson said, mindful of the distance they travel.

“We all have been affected by cancer in some way. We all know of stories to tell. We’ve all lost somebody,” Johnson added. “Tell stories — that’s how we deal with it.”

Tseshaht and Hupacaseth hosted the tour when it was in Port Alberni last year. This year, it was Huu-ay-aht’s turn to step up or drive up, more precisely, with 200 kilometres of rough road factored into the hosting. They hope other nations will follow suit, Johnson said.

There were 40 Tour de Rock participants this year, including 22 cyclists and 18 support crew.

“Last year, for the 20th year, we opened it up to fire and ambulance first responders and it went so well we decided to keep it going,” said Tanya Davis of the Canadian Cancer Society.

There is a lot more to the ride than the tour itself.

“These riders, some of them started as complete novices,” Davis said. “Some hadn’t been riding since they were kids.”

They make it look easy by training three days a week starting in March of each year. No one seemed out of breath at Alberni Summit, she noted.

“The Hump itself, it’s a big hill for sure,” said Matt Arnsdorf, a Victoria firefighter doing the ride this year. They stopped at the top to rehydrate, have a snack and hold a pep talk.

“We will conquer every hill as a team,” Arnsdorf said.

Plenty of local residents filed into Alberni Athletic Hall for the welcoming dinner, cancer survivors among them. One of them was Rhonda Maczulat of Port Alberni, who addressed the hall to share thoughts after surviving a two-year struggle against breast cancer.

“You don’t wake up one day thinking you’re going to have somebody tell you that you have cancer,” she said. “I came to the point where I thought, ‘I’m too young to go.’  I did everything in my power to get healthy again.”

She used naturopathic medicines to counter the effects of chemotherapy.

“I can’t imagine kids having to deal with that,” she said, recalling the life-altering ordeal of cancer treatment. 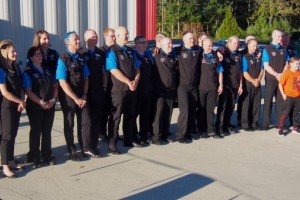