The speakers talked about what resources are available in the community and listened to ideas about what more could be done.

Matthew has been working with the NTC’s Quu’asa department for several years and has noticed that when services are provided with a strong cultural component more Indigenous people are open to accessing them.

“Culture is healing,” he said. Matthew credited his teachers, the late Ray Seitcher Sr. and others like Joe Tom and Dave Frank for providing valuable teachings in Nuu-chah-nulth spirituality and healing methods.

Const. McLeod is one of four First Nations policing officers working in Port Alberni. He volunteered for the position 10 years ago. Over that time he has worked teaching prevention and awareness programs in schools like Tseshaht’s Haahuupayuk School. He has had the privilege of learning from Nuu-chah-nulth elders to help guide his work, which he says is to serve and protect the community.

McLeod says the RCMP works in partnership with other agencies in their efforts to address social issues, especially in the area of addictions.

When things are going bad the RCMP are usually the first to respond as front-line workers. “We get that 911 call – we’re not counselors but sometimes we need to apprehend them to get them the support they need,” said McLeod. Often times that means a trip to the hospital, rather than jail cells.

Through his role as First Nations policing officer, McLeod has been talking to both elders and youth in an attempt to bridge the gap and better serve the community. He has taken his hobby of documentary film-making into the classrooms, to show high school students the dangers of drugs, straight from Vancouver’s Downtown Eastside.

McLeod admits that he doesn’t have all the answers when it comes to social issues, but said he’s learned a valuable lesson from the elders, and that is to listen to the people.

During the question and answer period, someone asked what they should do in the case of a suspected drug overdose. McLeod advised that it is important to call 911 immediately.

“It is important to get them help immediately even though they might just be nukchoo (drunk),” he said.

McLeod pointed out that there are service organizations in town that can provide Naloxone kits and training for anyone interested. Naloxone is a medication that reverses the effects of opioid drugs.

When people in the audience talked about ongoing addictions and children placed in care as a result, Matthew offered the support of the NTC Quu’asa/Teechuktl team. “We are a team of 31 filtered out to each Nuu-chah-nulth region,” he said.

The Quu’asa/Teechuktl team offers a wide variety of support and referral services ranging from one-on-one counseling, to support groups. “We have weekly men and women’s support groups and we are open to ideas; we could start a parents’ support group,” Matthew suggested.

Matthew said that in the past, Teechuktl staff have supported families by doing things like facilitating family meetings to help solve problems like homelessness and addictions.

“We are open to doing these kinds of things,” he said.

“We will never have enough money and resources to solve all the problems,” said Angus Campbell of Ahousaht. This is why, he said, it is important for people to understand that they need to take care of their family responsibilities.

“It is important for all of us to remember what our responsibilities are to our children and grandchildren; if we take care of that, things will slowly get better,” he said.

Moderator Margaret Bird advised that there is always someone to talk to at the Quu’asa offices located in Port Alberni and outlying communities. In addition, information and referral services are available in each place. 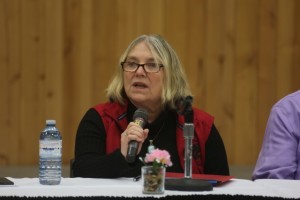