Ditidaht community builds capacity for its children in care

Peggy Hewa Marambage, Barb Tate and Sunny Cooper stand before the recently renovated foster home in the Ditidaht community by Nitinaht Lake. The building can now house up to four children in care. (Eric Plummer photo)

With attention to the adage that it takes a village to raise a child, a home opened on the Ditidaht reserve this month for the young members of the First Nation who need it the most.

There were previously no foster homes in Ditidaht’s Malachan reserve on Nitinaht Lake, but that is now changing with a newly renovated house.  With over $55,000 in donations and the efforts of 20 volunteers who brought the building up to living standards over 10 days in September, the new home can accommodate up to four children in care with a foster family. Financial supports included $30,000 from the Ditidaht Community School and $25,000 from Usma Nuu-chah-nulth Family and Child Services.

The paint was barely dry when the first foster child to live in the home saw her new room on Sept. 28. Now the child will be able to return to her home community to be around family members and her ancestral culture, while living under the care of an approved foster family from the Ditidaht  community, said the First Nation’s social development family care worker Peggy Hewa Marambage. The lack of foster homes in Malachan has caused several other children to leave the reserve after removals from birth parents, she added.

“We have nobody here that fosters whatsoever, because they all have their own issues,” said Hewa Marambage. “I think it’s a cause and effect of residential school, because [parents] have that trauma that our parents experienced - not having emotions to show the children, or even the experience to be parents. So our children that we’re having are becoming lost.”

This connection has been made on the national scale as well, where half of Canada’s children in care are from Indigenous families. Jane Philpott, Canada’s minister of Indigenous Services, has called the removal of First Nations children from their families a crisis that continues the harm of the forced assimilation under the Indian residential school program.

But the Ditidaht First Nation is taking steps to change this trend, and several households in Malachan, which is a community of under 200 residents, have recently stepped forward to become foster families.

“We asked Usma to come and do a workshop, and we actually had 13 households show up,” said Ditidaht community service manager Sunny Cooper. “People followed through to be foster parents and support.”

“That shows to me that we’re really ready for change,” she added.

“The way of our people that’s important is you know who you are, where you come from and who you’re related to,” she said. “We have children from our community that are out there in non-native homes. A lot of our children have never been here, they’ve been born out there and taken out there. They haven’t had the chance to connect with family.”

On Sept. 28 six other children in care visited Malachan to spend time around family in Ditidaht territory. Earlier in the month a group of youngsters from Victoria visited their hahoulthee with Surrounded By Cedar Child and Family Services.

“They came for a weekend and it was phenomenal,” said Cooper. “They hiked the territory, they were in boats, we had a big dinner for them, it was very moving and those kids found some belonging.”

“They were born in the city, were raised up in the city and it was their first time to come here. I think it was overwhelming to them,” commented Edgar. “They’re more than welcome to come home, they have a lot of family here. But the thing is, there’s a housing shortage.”

Edgar said some homes in Malachan have as many as a dozen occupants, but more change is underway this month for those who need a safe living situation in the community. A safe house is currently being completed, a building that the Ditidaht are converting into a temporary home for women suffering from abuse or others who don’t have a safe living situation. The First Nation also plans to use the safe house as a transitional home for parents recovering from addiction issues.

Support has been provided by the First Nations Health Authority, and those using the safe house will have access to Telehealth, a videoconferencing program that connects patients to Island Health counsellors and doctors for sessions.

“This summer a gentleman had a heart attack, he has two small children,” she said. “The kids came and stayed at my house, but it would have been great if there had been a place they could go.”

Like so many other Nuu-chah-nulth communities on Vancouver Island, Malachan’s ongoing developments serve a deep desire to bring the nation’s children home. Ditidaht Councillor Terry Edgar compared the visiting foster children on Sept. 28 to the cyclical process of migrating salmon.

“Our fish have been returning home and creating new life for us, and that’s sort of what’s happening here today,” he said.

The family connections are more widespread than most people realize, said Esther Edgar

“I’m related to a lot of children here in more than one way,” she said. “Everybody in this community has relatives up and down the coast from Pacheedaht, Port Renfrew, all the way up to Kyuquot.” 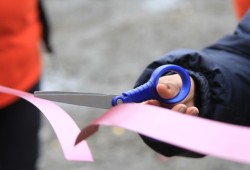 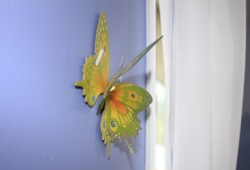