The humanitarian organization Khalsa Aid Canada has partnered with Ahousaht First Nation, supporting the newly created Maggie Sutlej Ahousaht Project with a $100,000 donation paid out over the next five years.

The announcement was made a gala fundraising event hosted by Khalsa Aid Canada at Parkville’s award-winning Tigh-Na-Mara Resort on Oct. 26.

Ha-Shilth-Sa told the story of little Maggie Sutlej, an Ahousaht toddler taken prisoner after a series of attacks on Ahousaht by the Royal Navy in Oct. 1864.

The little girl was subsequently ‘adopted’ by the wife of the captain of the HMS Sutlej and renamed Maggie Sutlej. She reportedly died two years later and was buried at sea.

The same Ha-Shilth-Sa story tells of how Jatinder Singh, Director of Khalsa Aid Canada and resident of Victoria, B.C. became aware of the Maggie Sutlej story. He talked about the Sikh community’s revulsion over the sacrilegious use of the name Sutlej, which is a name they consider sacred.

Jatinder Singh said the name Sutlej has special meaning to Sikhs. The word Punjab means five rivers; Sutlej is one of the five rivers that make up Punjab.

“It is extremely important because the ashes of at least three gurus are in the Sutlej River and its shoreline is dotted with Sikh temples,” said Singh. “It is associated with many Sikh historical events – it has lots of significance.

The people of Khalsa Aid wanted to reach out to Ahousaht, to find a way to take away the negative connotations that were placed on the name Sutlej by the British colonists.

Khalsa Aid is an international non-profit aid and relief organization founded on the Sikh principles of selfless service and universal love. For that reason, they decided the right thing to do was reach out a hand of friendship to Ahousaht in an effort to right an historic wrong.

The Sikh community had nothing to do with the attacks on Ahousaht or the kidnapping of Maggie, but they have a common interest in doing right by the Sutlej name.

Ravinder Singh, a British humanitarian and founder of Khalsa Aid, was a special guest at the gala. He is known for helping people in need around the world and has become known as the Selfless Sikh.

In his opening comments, Ravinder, better known as Ravi, acknowledged that the land here belongs to First Nations and other people there are guests. He mentioned his peoples’ struggles with colonialism.

“We also suffered many injustices. We know that pain,” said Ravi and he talked about the hurt caused by the improper use of the name Sutlej and the wars with the British Empire.

Ravi talked about reconciliation between communities. “It should not be just empty words but real support,” he said, adding that Maggie lives on and Ahousaht lives on.

He concluded his speech by saying that Khalsa Aid is reaching out in friendship, to become brothers and sisters in arms. He pledged to match Khalsa Aid Canada’s donation with an additional $100,000 from Khalsa Aid International.

He went on to say that the donated money, amounting to $40k per year, will be used for youth programs and Ahousaht’s search and rescue operations.

“We will be discussing further with the Ahousaht on what is required from us with our volunteers; it was personally important for me that they decide where the funds go, as they know where it is needed most within their community,” Jatinder said.

Kim Rai, NTC Quu’asa Coordinator is affiliated with Khalsa Aid Canada and helped organize the Gala. “I am happy to have Ahousaht join our family,” he said on behalf of Khalsa Aid.

“We are here in the spirit of reconciliation,” he said, adding that he has traveled across Canada with the Truth and Reconciliation Commission and saw first-hand that Canada needs to do more when it comes to reconciling with its First Nations.

BC MLA Scott Fraser and MP Gord Johns were invited guests at the gala. Scott Fraser is the Minister of Indigenous Relations and Reconciliation while Gord Johns is the MP for Courtenay/Alberni.

Jatinder thanked Ahousaht for accepting Khalsa Aid’s offer to work together to correct the historic wrong committed by colonists during and after the attack by the Royal Navy on Ahousaht in 1864.

It was Jatinder Singh that came across the tragic story of the renaming of the little girl with a name that is sacred to his people.

“The media has caught on and brought the traumatic story of this young girl to the public – and we know Maggie Sutlej was not actually her name,” said Jatinder.

Ahousaht elder Dave Frank talked about what prompted the Royal Navy’s attack on Ahousaht, saying it started with the crew of the trading ship Kingfisher abusing Ahousaht women, and an Ahousaht chief’s retaliation. He hinted that they know who Maggie was and claimed she didn’t die two years after her abduction but was dropped off somewhere. “We know where she went,” he said.

Whatever happened to little Maggie, she is being remembered as the little Ahousaht girl that was taken, never to return home.

“We want something positive to happen,” said Jatinder. “The Punjab and Sutlej River are important to us and to have that name used in the way it was is atrocious and hard to understand,” he continued.

Khalsa Aid recognizes the human race as one and says it is their hope that friendships like this one will bring peace.

“Ahousaht is like Khalsa – we are still here and we will continue to rise,” he said.

Another thing the two cultures have in common is the practise of blanketing people as a sign of respect and comfort.

The leaders of Khalsa called upon Maquinna, Ahousaht’s Tyee Ha’wilth or head chief, Lewis George and blanketed him. In addition, they honoured Maquinna by presenting him with a 19th century talwar (Sikh ceremonial sword).

Ahousaht ha’wiih (hereditary chiefs), in return, presented Jatinder Singh with a carved paddle featuring a pregnant bear – something that will remind people of the tragic story of the little Ahousaht girl, pulled from under her mother’s body in 1864.

The evening wound down with dinner and musical entertainment from both cultures. 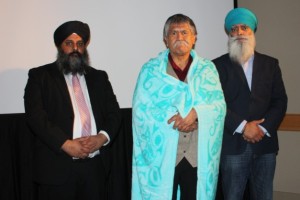 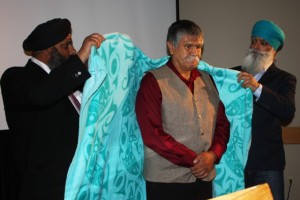