The Vector and its crew made stops in Bamfield, Port Alberni, Tofino and Ucluelet from Oct. 17 to 21. (Nora Martin photos)

A Canadian Coast Guard ship that studies centuries of natural history on the West Coast made stops in communities in October.

Peter Chandler, an oceanographer and project manager at Fisheries and Oceans Canada, worked to organize the PromoScience Expedition to the west coast of Vancouver Island. The Natural Resources Canada team was motivated to bring science to young people to inspire them.

The Vector has made stops in Bamfield, Port Alberni, Tofino and Ucluelet from Oct. 17 to 21. Shuttle service was arranged for the communities of the five First Nations in the central Nuu-cha-nulth region to tour the ship.

PromoScience has been going on for years, however this is the first time the initiative held an open house for public tours of the ship.

There were several stations set up on the ship and in each area scientists were on site to provide information on data collection.

Scientists research earthquakes and tsunamis by collecting sample of sediment from deep within the ocean floor. The samples of silt used to demonstrate what happened over the years dates back as far as the 1700s, appearing grey, dark grey and red in colour. The red-coloured silt is due to logging activity.

Chandler mentioned that what’s interesting about the sediment is it corroborates with what First Nations people along the coast already knew through oral history, songs and dances of the tsunami in the 1700s.

Within the Port Alberni area scientists found a sand layer that shows there was a beach there many years ago.

Randy Enkin, a research scientist with Natural Resources Canada, said that looking back in time it is important to note that in sedimentology the superposition of layers of sediment means old material is on the bottom then you get younger and younger mud on top.

Enkin explained that Fjords in Clayoquot Sound and Barkley Sound are very deep bodies of water, but the entrance is shallow and there is no life. With no oxygen, no plants, no worms and no flatfish, soil and sediment cannot be reworked through a process called bioturbation.

Peter Chandler stated that the scientists are interested in developing relationships with First Nations people to combine wisdom, knowledge and science.

Susi McMillian, the PromoScience Expedition’s event organizer, used the analogy of an octopus that relates to First Nations teaching “everything is one”. Of all the players at the table, none are more important than the other.

To do an independent study on subjects like fish farm sites in the ocean or logging it requires many levels of governments to approve. When a study is complete the scientist forwards the data to other specialists to validate the findings - not one point of view is accepted in order to implement programs or services.

The CCGS Vector was built in 1967 is primarily used as a science research vessel, however the ship may be called upon to do search and rescue or fishery enforcement as well. The ship can accommodate eight scientists and 13 crew members. 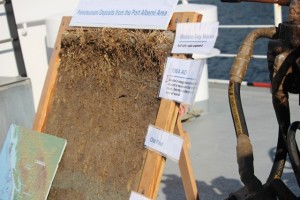 Within the Port Alberni area scientists from the vessel found a sand layer that shows there was a beach there many years ago.