Elders from the Mowachaht/Muchalaht First Nation performed a ceremony in Gold River for a baby killer whale, after the deceased orca was found on the shore of Nootka Island Wednesday. (Jack Johnson photos)

On Thursday elders from the Mowachaht/Muchalaht First Nation marked the passing of a significant being in the Nuu-chah-nulth world, after a baby killer whale was discovered on Nootka Island Wednesday.

The calf was found by a hiker on a beach near Beano Creek, located northwest of Yuquot on Nootka Island’s southern shore. The orca was airlifted by helicopter onto a Fisheries and Oceans Canada (DFO) vessel, then transported to the Gold River boat ramp, where Mowachaht/Muchalaht elders performed a ceremony for the kakaw`in, which means killer whale in Nuu-chah-nulth.

“We had a bit of a ceremony to send the spirit of the orca home,” said Tyee Ha’wilth Mike Maquinna. “Thanks to our elders and community members for showing up, and being very supportive.”

Ray Williams, who has lived in Yuquot for his whole life, resides in the villages’ only household. A DFO official informed him of the discovery on Wednesday, Nov. 14 after the hiker notified the federal fisheries department.

“We don’t see them often anymore,” said Williams, noting that sightings have decreased each year since his youth. “Forty, 50 years ago there used to be 30, 40 whales going by here, but now I only see four to six killer whales going by.”

It is yet to be determined if the kakaw`in belongs to the northern or southern resident killer whale populations, which are respectfully threatened and endangered under Canada’s Species at Risk Act.

“Our fishery officers in the area located the animal yesterday, and were able to collect a DNA sample for analysis despite difficult conditions and the remoteness of the location,” stated Fisheries and Oceans Canada in an email to the Ha-Shilth-Sa on Nov. 15.

The whale’s body will be sent to the provincial Animal Health Centre in Abbotford, while analysis of the DNA sample will identify what population the orca came from.

Maquinna is concerned about the mammals dying in his territory, and noted that his First Nation hopes to see the results of the necropsy to determine if they should be aware of any hazards for killer whales in Nootka Sound.

“We want to be prepared if it happens again,” he said. “Historically there’s been various types of whales that have washed up on shores.”

The Mowachaht/Muchalaht chief was thankful that the DFO officials were able to transport the orca during hazardous weather.

“Our people were very complimentary of Fisheries and Oceans today. They were able to bring the orca to us, rather than us going to the site. It’s a very difficult time weather-wise to get out there,” said Maquinna. “They were gifted by one of our chiefs in appreciation for what they’ve done today for us.”

Properly marking the passing of the kakaw`in was particularly important to many Mowachaht/Muchalaht members, and the First Nation’s elders gathered before the orca was transported from Nootka Island to determine the appropriate ceremony.

“Killer whales are a very important mammal in Mowachaht and Nuu-chah-nulth life,” said Williams, who was happy to see young people among the nearly 60 Mowachaht/Muchalaht members who attended the ceremony. “A lot of our younger generation don’t understand that sort of thing because they didn’t grow up the way we did, in our beliefs and our ways.”

“We certainly followed as much protocol as we could,” said Maquinna after the ceremony. “We’re hopeful that the spirit of the orca is going home.”

Before he died in 2001, the First Nation’s Tyee Ha’wilth Ambrose Maquinna said he would return as a killer whale. Three days later a lone orca was discovered in Nootka Sound, an appearance that many in the region saw as sign of the late chief’s deep love for his people and hahoulthee. Tsu’xiit, or Luna L-98, attracted worldwide media attention before passing in 2006. 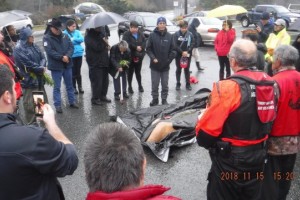 Tyee Ha’wilth Mike Maquinna speaks to the crowd gathered to mark the passing of the orca. 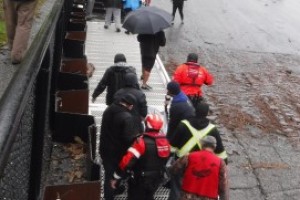 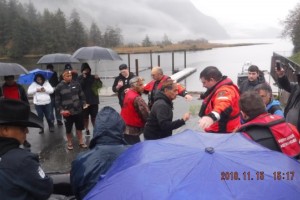 Fisheries and Oceans Canada officers are brushed by members of the Mowachaht/Muchalaht First Nation after transporting the orca. 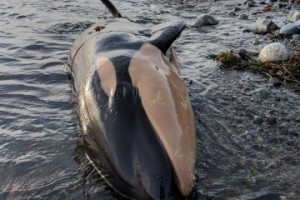 The killer whale was first reported by a hiker from the southern shore of Nootka Island on Nov. 14. (Mowachaht/Muchalaht First Nation photo)