Work on the 25-kilometre trail above Long Beach is set to begin in April 2019, a year later than announced in fall 2017 and with $17 million added to its budget. (Parks Canada map)

An unexpected delay in construction of a $51-million multi-use pathway through Pacific Rim National Park Reserve has enabled a better understanding of its cultural heritage and ecology, Parks Canada believes.

Work on the 25-kilometre trail above Long Beach is set to begin in April 2019, a year later than announced in fall 2017 and with $17 million added to its budget.

Representatives of Tla-o-qui-aht and Ucluelet First Nations met with Parks Canada and federal Minister of Environment and Climate Change Catherine McKenna in mid-November to discuss the project.

“Parks Canada has a higher need for being more technical when it comes to environmental issues,” Dorward said. Nesting sites for birdlife and migratory routes for frogs as well as endangered species had to be considered, he added. “That, I believe, delayed a lot of the work.”

Extra time was needed to complete not only environmental but also engineering, archeological and traditional-use studies as well as impact analysis along the route. In its conceptual design the path paralleled the existing park access road.

“We now have a better understanding of the cultural heritage of Pacific Rim National Park Reserve because we really didn’t have a good handle on that,” said Karen Haugen, park superintendent. “Working from the original concept with our Aboriginal partners, we have made some changes to the route.”

Instead, the trail will meander in and out of the forest, away from sensitive areas containing important habitat as well as cultural heritage sites from Indigenous and settler history.

“Building a path through a national park reserve is a complex undertaking and Parks Canada is committed to doing it in a responsible and sustainable way,” Haugen said.

Tla-o-qui-aht and Ucluelet First Nations are not only neighbours to the north and south respectively, they’re active partners with Parks Canada in the project, a relationship that recognizes Pacific Rim as part of their hah=uu>i (traditional territories) as well as a demand for economic opportunities.

Since the partnership was announced, elders selected a name for the path: ʔapsčiik t̓ašii (pronounced ups-cheek ta-shee). The Nuu-chah-nulth expression means “going in the right direction on the trail,” an appropriate choice to represent the collaborative project.

Archeologists working with Indigenous knowledge holders and elders were able to identify sites along the route, Haugen said. The trail is in the final stages of design with route changes intended to further the interpretive and educational values for visitors.

“The elders really wanted people to connect with the forest and understand how important the forest is to local First Nations,” Haugen said. The elders committee has oversight status on the project, Dorward noted.

On the economic side of the partnership, the nations are planning to pursue both short-term and long-term employment possibilities related to the project. Details of construction jobs have yet to be worked out. Parks Canada has issued a request for information from the nations in order to determine local capacity for the work involved.

The trail “will lead tourists to our doorstep,” part of a broader strategy around tourism development that includes construction of a gas station, Dorward said. They plan to get involved with the operation of kiosks along the route and environmental monitoring among other roles. Updates on training and employment opportunities are expected in December.

“We’ve been moving people through training,” he said.

Dorward and Haugen both pointed to the advantage of having a safe, healthy transportation route for cyclists and pedestrians. That applies to area residents and visitors alike.

“It’s a good way to connect, an alternative way of transportation, as well as the source of potential job opportunities,” Dorward said.

Another key consideration of elders was the idea of giving back to nature, Dorward added. Stream rehabilitation and fish habitat restoration along the route will serve that goal.

A completion date of 2020 - which happens to be the 50th anniversary of the park’s creation - was originally assigned. Haugen said it has yet to be determined whether the delay will push that date back. Some trail clearing has begun at the northern end. 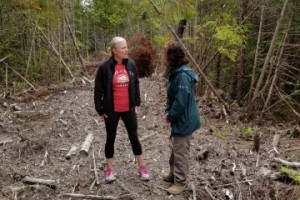