Alicia Stephens, an Ahousaht fasion designer based in the Lower Mainland, sells a variety of products through her website, ranging from wearable art to beding to fashion accessories. (Supplied photos)

A Burnaby-based fashion designer from the Ahousaht First Nation is setting her sights on New York.

Alicia Stephens hopes to travel to the fashion mecca in September 2019, after receiving an invitation to take part in events coinciding with New York Fashion Week.

Stephens told Ha-Shilth-Sa that showing her work in New York is her ultimate dream.

“I am so excited to be bringing First Nations art to the capitol of fashion,” she wrote.

Stephens grew up with a keen interest in First Nations art. Her website states that she knew from the age of eight that she wanted to be an artist. Growing up, she was mentored by Kwakwaka'wakw artists Victor Newman and his uncle Sean Whonnock.

Alicia was recognized for her talent during her teen years, winning many awards for her artistry. In later years she expanded her repertoire to include carving, painting on canvas, beading, and interior decorating.

As a teenager, she modeled the clothing of First Nations fashion designers, a move that inspired her to create her own line of wearable fashion. She began with modern, everyday wear for younger people, inspiring them to show pride in their culture and heritage.

In 2012, Stephens painted designs on her wedge sandals and posted it on Facebook. Many people loved Alicia’s work and the orders came pouring in.

She went on to purses, wallets, rings and many other wearable pieces; she named her line Alicia's Ink. Constantly developing and evolving her art work, Alicia’s distinct lines and form depict strong traditional design with modern flair.

“I love the creative part in my work. I can stare at a piece and a design will pop out and the paint will start. I get obsessed with certain colors and see them everywhere,” wrote Stephens

Alicia’s products are in high demand and she has shipped them all over North America.

She shows her pieces on social media platforms and now has her own website, renamed Alicia’s Designs.

Then one day she received a message received through her website from someone name Taylor Hannon who mentioned something about New York Fashion Week.

“At first I thought this can’t be real; this must be spam,” said Stephens.

As she read on she noticed that Hannon brought up details which indicated to Stephens that this was an actual invitation.

“I got the chills,” said Stephens.

Hannon, a curator for Oxford Fashion Studio, told Stephens that she and her team combs the internet, searching the webpages of more than 40,000 new and upcoming fashion designers. When they came across Alicia’s Designs, the whole team loved it.

Stephens received a confirmation email on Nov. 26, giving her five days to accept the invitation. She is excited about the opportunity.

“I will be the only First Nations woman and the only Canadian designer there,” she said.

Alicia’s mother Bettina Thomas is proud of her daughter’s achievements.

“This is so exciting! We were like, oh my God,” Thomas gushed.

Stephens has nine months to create eight looks for the show. She is still working on her design concepts but thinks she will go with some formal wear, some ready-to-wear along with her signature purses and shoes.

“I am thinking of going with the traditional button blanket as inspiration and may use felt in my designs,” she said.

As for motifs, she plans to go with First Nations eagle designs because, she said, they seem to have a really good flow. They are simple with fewer small details.

The trip to the Oxford Fashion Studio event - which occurs during New York Fashion Week - will be expensive, starting with the $10,100 entry fee. This fee, says Stephens, pays for the models, make-up, hair, photography and other expenses associated with the production of the show. In addition, she needs to pay for her travel to New York as well as materials and possibly a seamstress to help make her collection.

Alicia has launched a crowd funding page to begin raising at least $20,000 to pay for costs associated with the show. 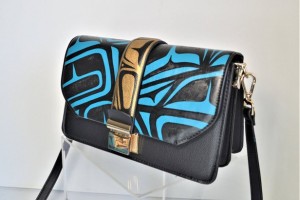 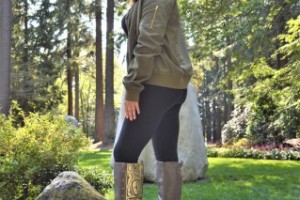 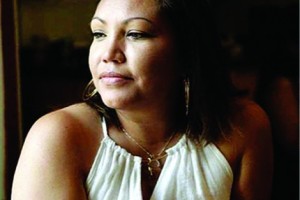