A collaborative community and harbour cleanup - considered the first on this scale in Canada - is nearing completion on Flores Island.

“This is the first project of its kind on this scale in Canada,” by virtue of the unusual partnership, said Capt. Josh Temple, CRS co-founder, adding that he’s very to be undertaking the effort with Ahousaht and Cermaq.

Much of the effort has concentrated on accumulated residential waste and harbour rehabilitation. The four-week term of the project entails the removal of 125 vehicles, 30 vessels under 30 feet, 500 appliances and 80 large industrial containers of debris.

“The cleanup has been an incredible project,” said Anne Atleo, AFN manager of administration. “The community lands so need to be more cared for. There’s just a lot of pride in the work that the crew has put into gathering up the debris.”

The community cleanup is something of a departure from the norm for CRS but has been high on Temple’s list of priorities. He started to get involved a couple of years ago.

“I wanted to perform some community revitalization projects in Clayoquot Sound — not just Ahousaht but also Tla-oqui-aht and Hesquiaht — and began to pursue funding,” he said. “With Coastal Restoration we try to create meaningful and long-term employment opportunities for First Nations through our First Nation initiatives to kind of step away from the notion that this work needs to be volunteer.”

Cermaq and CRS have partnered on two previous projects, the cleanup and habitat restoration work in Cleland Island Ecological Reserve earlier this year and a similar project in Hesquiaht Harbour in 2017.

Protecting wild salmon populations and reducing ocean-borne plastics are priorities for Cermaq and the company supports the Ahousaht project in the spirit of reconciliation, Kiemele said.

The scope and nature of the project have been challenging, Temple said.

“There’s a lot of challenges in working in remote First Nations territories with projects such as this, especially when the limiting factor is funding,” Temple said, adding that the cost of cleaning up in such communities is immense. “It’s something desperately needed.”

Nonetheless, they’ve been able to achieve exceptional results with very little money, he said, giving credit to the partnership.

“This has really created an energy and a spark in the community in the last couple of weeks,” he said.

Almost all of the progress achieved so far in cleaning up the coast has been through community endeavors involving the local private sector and volunteers.

“We haven’t received any other than $1,000 from B.C. Parks,” a drop in the bucket compared to the hundreds of thousands spent so far on cleanup efforts, Temple said.

The Canadian government’s Ocean Protection Plan, announced in 2016, has yet to live up to its name, said Temple.

“I raise funds solely through door knocking with industry and private individuals,” he added. “We’ve applied to grant programs and been denied every one of them. You hear a lot of rhetoric and talk of reconciliation, but when it comes to putting the rubber on the road, they don’t follow through.” 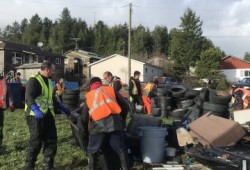 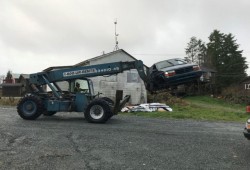 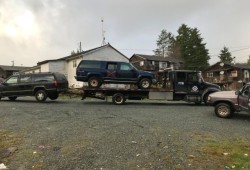