The Forest Practices Board is examining old growth harvesting in the Nahmint Valley, located southwest of Port Alberni, in response to a public complaint. The B.C. Ministry of Forests has also completed an investigation into the practices, but is yet to release any results. (Eric Plummer photos)

A forestry watchdog is investigating practices in the Nahmint valley after a year of intensified old growth harvesting in the region southwest of Port Alberni.

The Forest Practices Board is currently conducting interviews to gather information about old growth logging in Nahmint, part of an extensive assessment that will include visits to the area south of Sproat Lake. Darlene Oman of FPB communications said that their study of the ongoing forestry practices in Nahmint will determine if the logging has complied with provincial legislation.

“We’re required to investigate complaints that the public brings to us, as long as they relate to activities under the Forest and Range Practices Act,” she said. “We are doing an investigation, looking into the allegations in the complaint. What we investigate is whether the licensees involved have complied with the requirements of the legislation.”

That complaint came from the Ancient Forest Alliance, a Vancouver Island-based group that advocates for sustainable forestry and the protection of old-growth trees. In May the Ancient Forest Alliance publicized the logging of massive old-growth fir and cedar in Nahmint, including one Douglas fir tree that measured three metres in diameter, dimensions that would rank it among the top 10 largest and oldest of its species in Canada, according to the BC Big Tree Registry.

“The nature of that complaint was we believed that logging in the Nahmint Valley did not comply with the objectives set out in the Vancouver Island Land Use Plan,” said Innes. “The Vancouver Island Land Use Plan explicitly says that old-growth characteristics, including old growth Douglas fir trees, should be maintained under forest stewardship plans.”

The land use plan, which was released in 2000, states that “emphasis should be on high biodiversity values” for Nahmint, with objectives citing maximum clearcuts of five hectares. This is a relatively small cutblock compared to the province’s Nahmint Watershed Review in 1991, which stated clearcuts “will typically be in the 30-hectare range. Openings in excess of 40 hectares will be the exception.”

Yet a visit to the Nahmint Valley in late November yielded indications of a gold-rush for harvesting old growth from the region. The Ha-Shilth-Sa witnessed a semi-trailer pulling two fuel tankers leaving an area currently being served by an Erickson helicopter, a heavy lifting, twin engine skycrane aircraft that normally costs thousands of dollars an hour to operate. Clearcuts stretch up the slopes along some logging roads, as piles of felled cedar and Douglas fir await transport.

Opposition to logging in Nahmint this year has been focused on the practices of BC Timber Sales, a provincial agency that manages the auction of Crown forest land. According to the Tseshaht, BCTS auctioned five timber sale licences in the First Nation’s territory without consent. Those licences were sold between November 2017 and March 2018 during a time when the market value of Douglas fir had reached a record high in the Pacific Northwest. The Tseshaht and the Ministry of Forests have been in negotiations over Nahmint this year, but any results of these talks are yet to be publicized.

Under its Best Management Practices for Coastal Legacy Trees, BCTS states that enormous old growth trees “are often attributed with having important cultural, aesthetic and ecological value. These trees, when retained, can play an important role in habitat conservation by bridging old-growth characteristics into second-growth stands.”

That document, which was produced in September 2017, lists guidelines for legacy tree retention at a minimum of 2.1 metres for Douglas fir and three meters for Western Red cedar. But trees cut in Nahmint have exceeded those limits, as witnessed by the Ha-Shilth-Sa during visits to the area.

Since the summer, some massive legacy trees have been are clearly marked for protection in Nahmint, including next to a line in the forest flagged for road construction. But some are left to wonder if these legacy trees will be solitary figures left in a clearcut after the surrounding forest is logged.

Another investigation into logging practices in Nahmint was completed by the Ministry of Forests, according to Innes. But despite the Ancient Forest Alliance’s Freedom of Information and Protection of Privacy Act request, results of this investigation have not been made public.

Meanwhile, the Forest Practices Board’s investigation could last for over a year.

“Our investigations can take anywhere from eight or nine months, up to a year and a half or two years, depending on what’s involved,” said Oman. “We could make recommendations to the companies involved, or it could be to the government.” 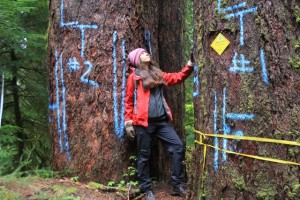 Some legacy trees have been marked by BC Timber Sales in the area to protect them from logging. 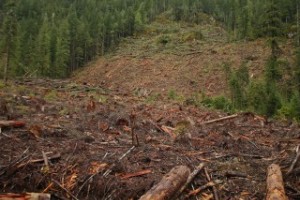 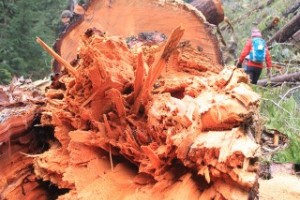 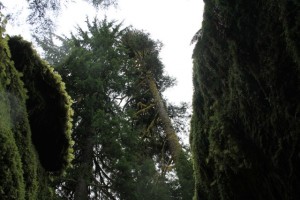