With its bedding of leaves and trigs as well as the claw marks on the inside of the cavity wall, this hollow old-growth stumps appears to be an example of a bear den destroyed by logging in the Nahmint Valley. Unlike in Haida Gwaii and the Great Bear Rainforest, bear dens within old-growth trees on Vancouver Island have no regulatory protection. (Eric Plummer photo)

A tree stump sits next to a logging road in a harvested section of the Nahmint Valley, surrounded by piles of fallen old-growth stands awaiting transportation to lucrative timber markets. Within the hollow stump lies a bed of dried leaves and twigs, with deep claw markings on the inside wall of the cavity. Its shelter removed when the tree was logged, what remains of the stand matches the characteristics of bear dens that exist within large old growth trees throughout Vancouver Island, making the stump an indication of how forestry in Nahmint is impacting wildlife that rely on the region for habitat.

Logging in Nahmint, a valley southwest of Port Alberni containing some of the largest old-growth trees in Canada, has intensified over the last year and a half. Several cutblocks of Crown land in the area were auctioned by BC Timber Sales during a period when Douglas fir and western red cedar lumber prices approached record highs for the Pacific Northwest. But as harvesting continues to feed hungry international buyers for the old-growth wood, bears and other animals depending on the massive trees are being forced out of their homes.

Vancouver Island sees some of the heaviest amounts of annual rainfall in the country, making old-growth trees essential shelter for black bears during the winter months when the majority of precipitation occurs. It is within and under the cavities of these massive trees where coastal black bears find the only places where they can keep warm and dry, allowing females to give birth to cubs, said Helen Davis of Artemis Wildlife Consultants. She said the entrances to bear dens usually measure about 30 by 35 centimetres at the base of an old-growth tree.

“The entrances need to be small to protect females and their cubs when denning because bears can’t produce cubs except for in a den,” she said. “Females den quite a bit longer than males and they’re kind of sitting ducks, unfortunately, that can be attacked in their dens.”

Through an extensive study of bear dens in the Nimpkish Valley during the 1990s, Davis found that certain trees offer this seasonal protection to generations of black bears. But despite their value to the species, the forestry industry hasn’t improved its practices since the Nimpkish project concluded in 1995, said Davis.

“They are critical habitat features and the provincial government refuses to protect them,” she said. “They’ve never been protected. They have now protected them in Haida Gwai and they have protected them in the Great Bear Rainforest - and that is purely because of First Nations pressure.”

In recent years Davis has worked with the Pacheedaht First Nation to convert stumps and construct artificial structures into bear dens to increase the number of shelters being removed through logging. She’s also working to educate forestry companies on how to better identify bear dens.

“I think it would be great if we could do some more training with the people who are doing the cultural tree surveys, that they also know what to look for [to identify] a bear den,” she said. “Looking for the claw marks - what we call bear carpentry, chewing and claw marks to make entrances bigger – but also on the inside. Looking for bear hair, which is quite common in the entrance way, and then bedding is a big indicator.”

Located within territory that has been home to Nuu-chah-nulth tribes for thousands of years, the Nahmint Valley is managed by BC Timber Sales, a provincial agency that auctions Crown land for harvesting. BCTS lists its “Best Management Practices for Bear Dens” on parts of Vancouver Island like Nahmint, which advises foresters to report potential dens to BCTS before the host trees are cut. The document stresses the need to record, photograph and mark these dens, with a minimum disturbance distance of 200 metres from the host tree from Nov. 1-May 15, or 50 metres during other times of the year.

But the BCTS document also states that the protection of bear dens is not legally required, leaving some to wonder if the best management practices have any influence on an area like Nahmint, where high timber values lead contractors to employ helicopter logging that costs thousands of dollars an hour.

“People don’t walk the blocks like they need to find dens,” said Davis.

“There should be safeguards in place for the surveyors to have detected such a conspicuous wildlife feature - and at least not have cut that tree and leave a buffer around it,” added Chris Darimont, an associate professor and the Raincoast Research Chair in Applied Conservation Science at the University of Victoria’s Department of Geography.

Forestry is not a new phenomenon in Nahmint and elsewhere in Nuu-chah-nulth territory, as for thousands of years First Nations selectively harvested trees for building, clothing and other facets of their sustenance. But the industrial-scale logging introduced 150 years ago has brought new challenges for bears and other species who rely on old-growth forests.

“Indigenous people certainly used a lot of wood to build structures, canoes and everything…but they certainly didn’t sell it on massive local markets where now a 1,000-year old cedar tree essentially becomes a commodity,” said Darimont. “The kinds of volumes that are being removed from these forests now are extremely high, and the methods that they do forestry now is much more fast-paced, loud, polluting. There’s road systems now where there weren’t before.”

Clearcuts can increase the availability of food for bears by allowing berry bushes to grow more rapidly in the open terrain, but Darimont sees this as a hazard for the species.

“In the first five or 10 years post logging there might be a lot of plant growth and berries emerging; I kind of consider that like a severance package,” he said. “It’s going to be very dangerous food to get to because it’s going to be surrounded by roads people are using.”

“When you build roads and you put guys in pickup trucks on these roads, we know unequivocally that the human-caused death of wildlife goes up,” he added, noting that the last half century has been a difficult for the Vancouver Island black bear. “In the last 50, 60 years they are facing changes like they have never seen before, in terms of their habitat changing so rapidly, salmon stocks declining and people killing them for sport, rather than for food.”

As a bear den continues to sit in Nahmint with its roof cut off, the Forest Practices Board is undertaking a thorough investigation of harvesting in the valley. Yet an assessment completed in the fall of 2018 by B.C.’s Ministry of Forests, Lands, Natural Resource Operations and Rural Development concluded that logging in Nahmint has not broken provincial regulations.

“The Compliance and Enforcement branch has concluded their investigation and determined there is nothing substantive that falls under their responsibility or concerns them at this time,” stated the ministry in an email to the Ha-Shilth-Sa. 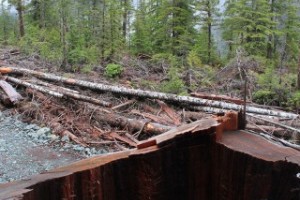