The early winter storms of December and January hit Vancouver Island with a vengeance - but islanders showed their resilience as they pulled together to help one another.

After 600,000 customers lost power on Dec. 20, BC Hydro has declared the pre-Christmas storm the worst in its history. But challenges continued into January for the residents of the Ditidaht First Nation’s reserve by Nitinaht Lake. The road to Nitinaht was impassable on January 4, with flood waters at a depth of about five feet in some places along the road.

On that day Luke Little, 36, travelled the Carmanah Main Line out of Nitinaht. He said it was supposed to be a quick trip, as he was bringing his stepdaughter to Port Alberni with a quick turnaround back home.

“The road was already flooded after two days of rain but it wasn't that bad,” Little recalled.

He said there are four areas just outside of Nitinaht that are prone to flooding in wet weather. In extreme weather the four areas flood until they are connected, making one large flooded section of road.

“My stepdaughter Josie and I left at 9 in the morning and made it through three of the flooded sections easily enough,” said Little. He added that the fourth flooded section of road is about a 10-minute drive from Nitinaht.

As they passed through the fourth flooded section of road Josie remarked that it was kind of deep and she was concerned for Luke's safety. When he dropped Josie off in Port Alberni, Little told her that if nobody hears from him it is because he is waiting on the other side for the flood waters to go down. He made his way back to Nitinaht, expecting to be home by early afternoon.

The trip back was unremarkable until he reached the flooded area that concerned Josie. As Little drove his full-size pickup truck through the water he noticed it was much higher than earlier in the day.

“I've never seen water rushing over the hood of my truck like that,” said Little. “It almost stalled a couple of times but I just floored it to get through.”

When his truck finally stalled, Little was near a bridge.

With socks and shoes on, Little entered the knee-deep water and began walking. The current was strong and the water was bitterly cold, so he returned to the truck and dried his feet.

Finally, at about 11 that night Darryl Peter and Sam Edgar arrived in a boat to rescue him.

“The first thing out of my mouth was 'you got a smoke?',” laughed Little, adding that he smokes a lot.

According the RCMP, Little was stranded on a bridge at the 26-kilometre marker. Road flooding at both ends of the bridge had risen to impassible levels. The RCMP had been dispatched to rescue Little, but came across another stranded family in need of help.

The family's vehicle had become disabled on a flooded road on South Shore Road. Once they were deemed safe, the officers proceeded toward Nitinaht in search of Little. The residents of Nitinaht had already rescued little in a small boat with an outboard motor.

Little was able to retrieve his 2018 Dodge Ram the following day.

“It's a V-8 and had the power to get through most of the floods,” said Little. His truck still runs, he added.

Phone lines in Nitinaht were down for several days due to the Dec. 20 windstorm. According to one resident, about 30 families evacuated the village ahead of the storms. Some families with their own generators stayed behind.

Residents knew they would have to face days without power and there was a good possibility they would be stranded as the access road to the community flooded. This happens every year.

Crystal Amos has lived in the Ditidaht reserve for six years. Two of her four children suffer with asthma, so when they find out that bad weather is coming they head to the city.

“When they have an asthma attack it can get serious, so it's important that they have access to medical services,” said the daycare manager.

While the Ditidaht First Nation may provide support to evacuees in extraordinary circumstances, Amos said they have family in Port Alberni that they can turn to in times of need.

And with all the road flooding and power failures, the Amos family decided it would be best to spend the entire Christmas holiday in Port Alberni with family.

When they returned home they faced a smelly clean up, as they lost all their frozen food fish and deer meat.

“We had enough smoked salmon to feed our family of six all winter long,” Amos said.

Amos says she has a generator at home but loaned it out, knowing she wouldn't need it while in town. But the power failure lasted so long that people in the village were running out of fuel.

Amos made a plea for help on social media and collected $305 in donations to pay for fuel and jerry cans, which were sent to the Ditidaht reserve with the First Nation’s elected councillor Darryl Tate, who distributed it to whomever needed it.

Amos said there was a mother of six in the village who tried to save her freezer food by using a generator.

Indigenous Services Canada may provide assistance to First Nations families on reserve who can verify through BC Hydro that they have been without power for more than 48 hours. This includes up to $400 per household available to help cover the cost of spoiled perishables due to extended power failures.

“Compensation is available to First Nation community residents who do not have insurance that covers the damages to basic and essential personal items that were caused by the emergency event,” states the federal government’s Emergency Management Assistance Program. “To be eligible, First Nation residents are required to provide a declaration confirming they do not have insurance for damages to their basic and essential personal items.”

Amos shared a story about another village resident, Dana Campbell, who made a trip to nearby Youbou   shortly after the windstorm. There were trees fallen all over the rough logging roads. Campbell followed a logging truck along the road. The driver of the truck would stop and cut up the trees to clear the road along the way. The 68-kilometre trip along North Shore Road took seven hours.

Amos is a member of Ditidaht's Economic Development Committee. She says the committee plans to explore how they can bring improvements to access roads to the community.

“Maybe we can elevate the road or open a back road for alternate access,” she said. 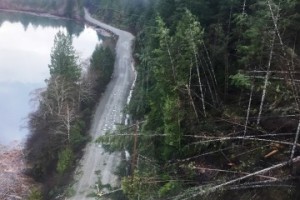 This overhead photo of the road to Bamfield shows the effects of recent storms. (BC Hydro photo) 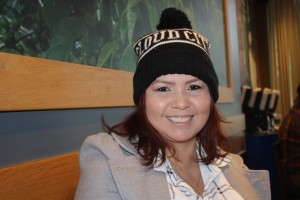